I received a very nice email from a lady yesterday.  She had stumbled upon my “No-Bullying Proposal Webquest” and offered another resource for the resources page.  I thought that was pretty cool.  I’d almost forgotten about that webquest.  I am a big fan of the webquest as a nice structured way to combine internet research, collaboration, inquiry, and the production of a final piece.  I have done tonnes of workshops for teachers, written a few of my own, and even wrote a Webquest Locator that had something like a thousand different webquests that were all organized by subject area and the Ontario Curriculum.

This particular webquest goes back to 2007 for its first creation.  At the time, I was working with a small passionate group of educators and I remember sitting around a table during one of our Friday morning meetings talking about how schools were dealing with the topic of bullying in schools.  So many, at the time, had an anti-bullying event or assembly where you brought together students and perhaps parents to listen to a peace officer share some bullying stories for an hour and then it was back to the normal routine.  It was there that I thought the idea of a webquest with 3-5 students intensely working on a project might yield better results.  At the time, we were also in the midst of rolling out laptop computers to classrooms and were trying to break the notion that every students needed her own computer all the time or it wouldn’t be a productive use of time.  In our vision, the group of students would have one or two laptops to do some internet research a la the webquest model while the other members were doing something else related to the project.

Roll the clock ahead five years now and it’s not inconceivable that that same group of 3-5 students could still benefit from the activity but the tools might be slightly different.  There might be an iPad at the table or a SmartPhone or some other BYOD in addition to the school provided technology.

Now, I no longer maintain the original webquest but I could post it again with the new resource and make it available to my valued blog readers.

As I started to look at it, I realized that it was looking a little worse for wear!  One of the key points about a webquest is use the content from the web and not necessarily spend time searching for it.  To that end, a webquest provides resources for students rather than having them “Google Something”.  So, the first step is something that everyone who provides web content should do regularly – check the links.  Uh oh.  Some of those terrific links from 2007 are no longer there or had moved.  That took some time hunting them down or giving up on them.  But, it’s worth it.  As it sits, all of the resources are correct and have relevant content.

Secondly, in 2007, I was going through my Flash years.  Everything that I created had Flash media on it.  That’s not so good in a world where your visitors may arrive on a tablet or a computer that doesn’t support Flash content or has it disabled.  This wasn’t a big job but all of the Flash buttons had to be replaced.  It wasn’t a big deal but I did also take some time to be concerned about the screen real estate of those who might be using Netbooks to access the webquest.  It’s a little sparse looking on a big honking monitor but fills a 1024×768 netbook nicely.  (with a bit of scrolling) 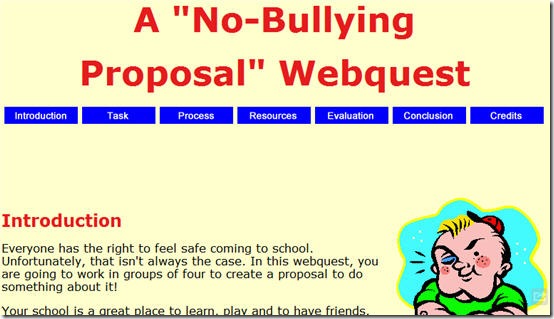 The finished result should be a resource that will play nicely on modern devices and the links are all up to date.  You can find and share the resource at http://www.dougpeterson.ca/nobullying/.