I’m sure that this web application was created as a toy and I use that word in the best possible way. Toy as in productive and engagingly interactive.

In fact, it’s described as “magical”.

“Lo-Fi Player” is a magical room where you can interact with music. It’s powered by machine learning models from Google Magenta

Your first instinct will be to dive in and tinker and there’s certainly nothing wrong with that. You interact with various objects around the room to play and adjust music and sounds.

Here’s some of what you can do.

Engaging certainly is a good way to describe playing around with this toy. The more that I played, the more I realized that there’s a great deal that could be used in the classroom.

In the music classroom, the exploration lets you adjust key components in any tune that you might want to create.

In the computer science classroom, all the code is available on GitHub. After learning how to use the application, your students can explore how the magic happens.

Documentation for the project is available here. I had to chuckle a bit with the name of the project because it’s anything but low technology in my mind. The presentation will take you back to your Commodore 64 or Apple II days with the block graphics used to make something pretty engaging.

It doesn’t stop with the application; you can send commands to a magical room on YouTube.

Read the “possible command” at the bottom of the page to get a sense of what’s possible.

This toy has a great deal of possible mileage to it. Check it out to see if it deserves a place in your classroom.


One of my favourite sessions that is held at the CSTA Conference is “Nifty Assignments”.

Of course, there are rules – and a philosophy.

Anyone who has ever taught Computer Science knows that the problems included in textbooks can be simple and often not all that inspiring. You know that you end up creating many (most?) problems on your own. Make them relevant to your class, cover the concepts you’re teaching, engage students, etc.

So, Nifty Assignments is an attempt, via session at the conference to address that. It’s very popular; whatever room it’s held in seems to always be packed and this year was no different.

The nifty resource can be found here.

This year’s collection has the following topics.

The slidedeck for the presentation is available as well. Check it out here.

Follow the links on the individual topics to get to the details for these five great, er, nifty assignments.

If you’re like me, you probably hear and read a lot about this.  “Chromebooks aren’t real computers”.

I always like to challenge back with a why?

The answers are typical – it doesn’t run Photoshop.  Or, I’m not always connected to the Internet.

So, I’ll add a reply to that – “When was the last time you used Photoshop?”  “Did you buy your current computer just because of Photoshop?” “If you could install a program on your Chromebook and could run it offline, would that change your perspective?”

Now, the misconception of a Chromebook’s capabilities undoubtedly stem back to the beginning when it really was a browser in a box needing an Internet connection.  It’s just that it’s come a long way since then but the Internet never forgets.  Neither do some of the silly people who still maintain that it’s just a browser.

In fact, the whole concept like the Chrome browser and Chromebook has come so far.  And, you’re not limited to just that; modern Chromebooks run Android and some are experimenting with Linux.

And yes, it’s not the product of universal choice in schools.  I’d be up in arms if someone indicated that a Computer Science or Drafting or Visual Arts program would be equally as served.  But, there are so many other areas where the Chromebook does a terrific job.

So terrific, in fact, that we’re now seeing that Microsoft is developing a version of Windows to put computers at the same price point.  That’s going to be interesting.

In the meantime, you owe it to yourself to get yourself up to speed.  To that end, you should check out the Chromebook Simulator in your current system.

Even if you are a Chromebook user, there’s always something new to learn.  Maybe a little time in the simulator will change the opinions of some or make others more sophisticated users!

With the Computer Science Teachers Association’s annual conference coming up in July there are a few things we thought you should know now that we’ve sprung into spring and we’re less than two months away:

– Several workshops are at, or nearing capacity

– There will be NO onsite registration for workshops, so if you are interested you must sign up online in advance

– The online registration deadline is drawing near: June 26

The bottom line is, we don’t want you to put off registering any longer. This year is sure to be amazingly, wonderful, and memorable. Please come join us at DFW Lakes Executive Conference Center in Grapevine, Texas, July 12-14. http://www.cstaconference.org

If you have any questions, please contact Tiffany Nash at: t.nash@csta-hq.org.

Like most people, I think, I was curious about Flappy Bird when I read about the success that the developer had with it but more importantly, the $50,000 a day that he was reportedly making from it.  I downloaded the app and played with it for a bit and got a bit frustrated trying to get a 1 for a score and so deleted it.  I don’t have time to master this nonsense.

Then I read that Flappy Bird was going to be pulled from the application stores, never to return.  I figured that this was either an indication that he’d made a gazillion dollars and just didn’t want to support it going forward.  After all, nothing succeeds like success.  Score 1 for me, Brandon.  The other option was that this was some ploy to get a lot of downloads in a hurry.  I figured that I’d help the cause.  I might never play it again but at least I’d have a little bit of history.  So, I downloaded it again.  Add two downloads to the big total for me.

Bored one afternoon, I figured it was about time that I mastered it.  I got up to 3.  Grrrr.  When I read that a friend of mine’s daughter had a pretty good score, I realized that I just wasn’t cut out for flapping.

On the UK Microsoft blog, there was a post to promote the UK Hour of Code.  It was titled “All in a Flap – How to create your very own Flappy Bird clone (Guest Post)”.  Now, there were warnings that people were posting malware in their own clones of Flappy Bird but here was the opportunity to write your own.  I wondered…

The next step was predictable.  I sat down to work my way through the tutorial to see what I could do.

The tutorial was laid out in the form of a series of challenges.  Note the stars below.  Each is awarded at the end of the completion of a step.  Off I went. 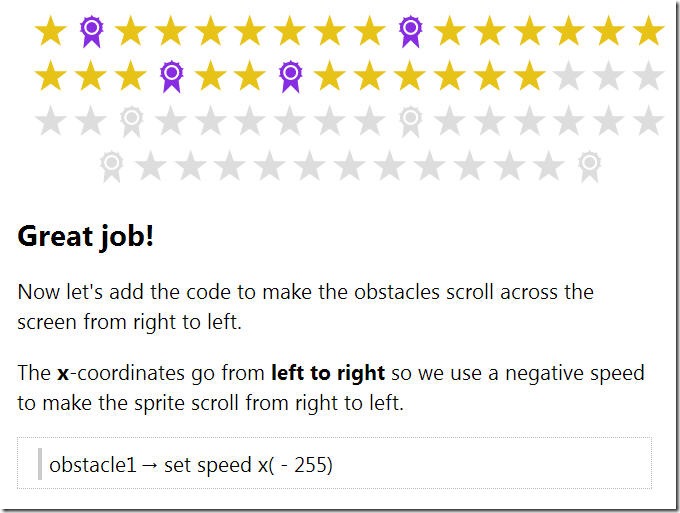 The development environment, with overlaid tutorial, is interesting.  Everything is designed to be tapped on to insert or edit your code as you go.  For this ol’ coder, the urge to use my keyboard was there.  However, I quickly boxed myself into a corner – the tutorial really was written for touch – so I gave in.  After a while, you just get used to it!  It’s not bad once you get the knack of it.  I did want to make my game a little different so instead of the suggested bat, I decided to flap with an orange.   It just didn’t cut it so I did go back and edit out the orange and replaced it with the bat.  The results made much more sense!

All along the way, there is a dialog to explain what would be done next.  You’re really stepping through the code development nicely.  Nothing is given to you – you have to add and edit everything.  I will admit to getting a bit frustrated but got over it in a hurry.  Once I decided to go with the mouse clicks to do the selection and editing, development moved along fairly nicely.  The only new challenge was when the desired action was on the next page of instructions.  Again, I got over that with a little patience.

The ongoing tutorial really did explain things nicely.  That will make it definitely easier to go back and modify the code afterwards.

When you’re done, it’s interesting to take a look at the code.  Having paid attention to the tutorial as I went along definitely made it easier to go back and modify the script to see what I could do to break a well put together program.   Selecting a line of code gets you back to the editing instructions.  The only thing missing was creating your own comments inline.

As you can see, I went with a desert theme.

You’re prompted as you go to log in to save your code.  That’s always good advice.  It also gives you the ability to publish your code as an application from the web.

All in all, it was an interesting activity.  I started with the end in mind and just kept going.  Once completed, the real fun was in going through the code to see how it was developed and then modify it for my own fun and enjoyment.

You can’t beat writing your own game where you make your own rules and make things easy enough to get a high score.  I think I’m at 5.