A lady I used to work with shared this resource the other day. I had to check it out and was quite impressed. So, thank you, Sharon.

The site is called Spot the Troll.

From the Clemson University Media Forensics Hub, this is an engaging activity designed to see if you can spot an online troll.

I think that most of us have seen activities like this one before so it may be a nice addition to your collection.

I found this one a little different.

So often, I can easily browse through activities like this and then move on. This quiz is from real life accounts and, quite frankly, these are not easily identified.

You’re presented with social media profiles and copies of posts to social media and it’s up to you to determine whether or not this is an internet troll. We’re all aware of the situation where these trolls try to make something look legitimate while at the same time delivering a false message.

There are eight profiles to analyse and come from a variety of platforms – Twitter, Facebook, and Instagram. In addition to the presentation of content, the tutorial will take you through an analysis of each that should have given you clues that the account was a troll or not.

If you think you know social media and are a wise judge, I would encourage you to take the test. In the classroom, if you want to help students become more sophisticated social media users, have them work their way through it. It’s really that good.

And, neither Sharon nor I got a perfect score. Grrrr.

Today marks a day of rotating strike action by ETFO members in the following districts:

Unfortunately, the voicEd This Week in Ontario Edublogs show had glitched when it was to be broadcast from the OLA Superconference. There were great blog posts to talk about and this one from Melanie White “Listening to Reflections” generated a comment from our guest host that day, Diana Maliszewski, about “Virtue Signalling”. Melanie’s original post had talked about the challenges that she had experienced using social media in the classroom.

Now, I’ll be honest and admit I hadn’t heard that expression below and Diana had just a few minutes to expand on it. I made myself a note to do some more work.

There’s a whole article devoted to it on the Wikipedia

Virtue signalling is a pejorative neologism for the conspicuous expression of moral values.[1][2] The origin of the term is often credited to journalist James Bartholomew from an article in The Spectator in 2015.[3]

It’s an interesting read as well as this article 12 Examples of Virtue Signaling.

Our original discussion had spurred me on to some additional reflection. Thanks, Diana.

What my reflection did was give my feelings something to hang my hat on. There are times when I’m consuming media only to see a celebrity or someone who thinks they’re a celebrity pictured doing the “right thing” or they’re talking about some cause that they are only on the sidelines about or they’re promoting their newest book.

While I don’t see this concept going away any time soon, I found it kind of healing to note that there is a label for this concept and there are others that are similarly challenged by it.

I’m not all in with all of the examples; maybe Tribalism is a good example; I’ll always be a Detroit Tigers, Minnesota Vikings, Montreal Canadiens fan.

However, I will think about the impact the next time I take a selfie.

It’s an interesting concept to think about – where is that fine line between actually doing good as opposed to posting something that makes you look like you’re doing good?

I hate to admit it but I’m missing Google+.

I used it as a place to go for serious research, reading, and topics.  Yes, I am on Facebook but it’s more of a fun place.  I had a great collection of things to read  on Google + like Technology Coordinators, some of the organizations that support teachers directly, a number of education forums, Formula 1, and probably a bunch of other things that I can no longer remember!

I contributed when the mood hit me but I really liked the curated sources that I got from the groups I followed.  I shared back and also used it as a place to automatically share posts from this blog.  It always a hoot to get a +1 from Skip Zalneraitis and he was good enough to share posts with his network at times.  In particular, he seemed to like the This Week in Ontario Edublogs series of posts.

But, that’s all gone now and nobody has left a forwarding address!

Except for Peter Vogel, that is.  Don’t know Peter?  I think he’s in line to go to the International Space Station.

I got an invitation from him yesterday to join him on MeWe. 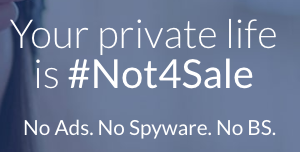 So, I took Peter up on his offer.  Peter has a great selection of interests – security, astronomy, photography, … so I was interested to see how he was using the service.

The interface looks modern and yet somehow very familiar.

I started a chat with Peter to thank him for the invitation and that sure looked familiar too.  I wondered about the tracking and uBlock Origin only identified 1 (mewe itself) and Privacy Badger had nothing.

Then, I poked around and added a number of groups to my set of interests.  With each login, there are red dots notifying me of new things.  I poked around looking for friends and couldn’t find anyone other than Peter!  Maybe I’m just early to the party?

I thought about setting up my blog there.  I’m OK with a bit of work but it’s typically directed towards automation so that I don’t have to do it regularly.  i.e. daily from this blog.  Sadly, I couldn’t find any IFTTT scripts or auto posting ability from WordPress.  Maybe with time and success, MeWe will get support.

In the meantime, I’m like a kid in a candy store looking through the shelves deciding what it is I want and what I don’t.  The content focus, at this time at least, is very American but that too can change.

So, I’m over there kicking tires and trying the candy.  Are you interested in joining me?  For former Google+ users, where have you gone?  Is there a party somewhere I don’t know about?

It’s been a while since I even thought about that advice but certainly I’ve blogged about it more than once.  Like this one.

The context was a few years ago when the Ontario Teachers’ Federation was developing and supporting a culture of responsible web and social media use by Ontario teachers.  It seems so long ago but the lesson isn’t necessarily learned.

I remember Bob Fisher from OSSTF speaking so eloquently about this and I closed that blog post off quoting him.

I think that Bob spoke for everyone when he offered the best advice of all.  With all the good that can be done,  “Don’t Do Stupid Things”.

Wouldn’t it be nice if the period at the end of that sentence marked the last time that we even thought about this.  At the risk of being called snooty again, I can’t stand by and not comment on this event which is all over the news this morning.

Just one of the stories:

When I first heard about this, I figured that it would eventually be written off as “fake news” somewhere.  But, we don’t look for that now since he has formally apologised to the court.

I can’t imagine, in my mind, any case where, if charged, you should be using social media to argue their case by attacking their judge.  It would seem to me a better tact would be to take some selfies walking dogs from the local Human Society or something to build a nicer digital footprint.

This is another case of reminding yourself that people follow you on social media.  They digest your writing, look at and evaluate/share your photos and videos.  And, I would suspect that if you were in the news, every reporter or at least their media outlet would be following every move that you make on social media.  Removing a post doesn’t get rid of it.  Any computer user worth her/his salt knows how to do a screen capture.

Back to OTF and learning about all this.  The discussion at the time was whether we needed the Teacher Federations and School Districts to specifically spell out all the dos and don’ts that are necessary.  The number of scenarios is limitless – how could you cover them all?  Get way out of line and the College of Teachers can get involved.

It’s still nicely summed up with “Don’t do stupid things”.

If you’re a teacher, you don’t criticize your employer or school administration publically.  If you’re a student, you don’t do the same with your teachers.  If you’re receiving discipline from the school, you don’t take your case online.  You can’t win.  Sadly, there are some that consider social media as a place where you can always have the last word.

You just keep on stating your case until the other side gives up.

Or, takes it to the next level.

But, I’ll confess that I’ve always wanted to.

I was curious about the account “PicardTips” so I used the lookup feature on Hootsuite. 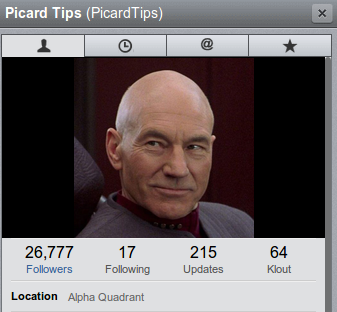 Wow, look at the Klout this man has! 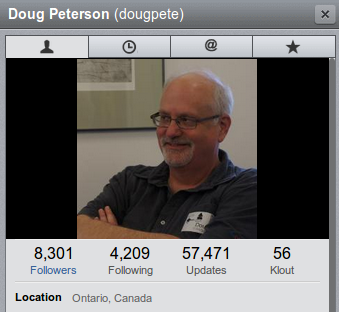 Obviously, not even in the same galaxy, out scored 64-56.

Have you checked your Klout?  Do you have more Klout than the good captain?  (Do you care?)

In the meantime, I spent the rest of the day practicing.

It confirmed to the family that I’ve lost it.