Microsoft has stopped support for Windows XP.  It’s an event that we have seen coming for some time.  Folks connecting their computers to the internet really need to do something just to ensure that they remain safe while browsing.  No more security updates will be coming your way.

I still have a computer that runs Windows XP.  Well, actually it would run Windows XP if I put the hard drive back in it.  I pulled the hard drive when I got my Windows 7 laptop and transferred files via cable. 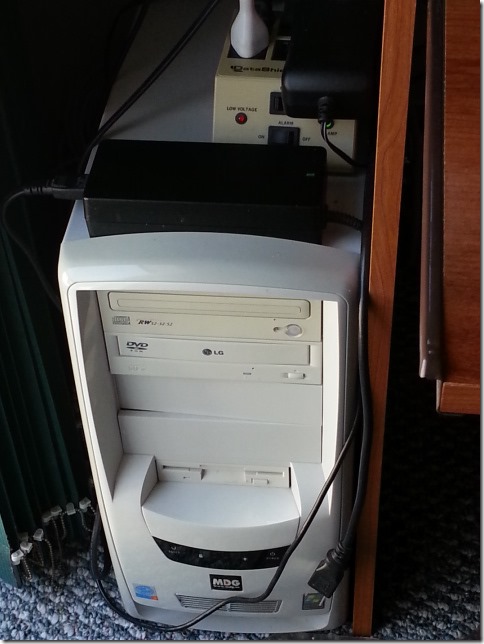 Right now, the box is relegated to being a platform for the power supply for the laptop that replaced it and my DataShield power filtering device.  I suppose if I was inclined, I could open the DVD or the CD-ROM player and use it as a the proverbial coffee holder.  For now though, it does work nicely as an end table.

I know that many people will be so happy to see Windows XP gone.  It has been a bear to support lately and a prime target for malware writers.  I don’t think that I ever ended up with any installed but that machine has been history for at least four years after I purchased the Windows 7 box.  I needed the power to be able to do the rendering and other things that the old Pentium 2 machine would take over night to do.  But years ago, I thought I’d reached utopia just in the fact that I could do what I could do with it.

It was a nice crossover  point between the “old” versions of Windows whose claim to fame was the refinement of the Graphic User Interface and the newer versions of Windows which are so functional for high work, coupled with the power processors that we have at relatively affordable prices.

For me, the tinkerer, Windows XP was the first operating system that I really tinkered with.  First thing I did was change the default colours – my mother told me that you should never have blue and green together!  I switched to the silver toolbars and felt quite proud to be able to stand out in a crowd.  Of course, Windows XP allowed for the custom wallpapers and, if you took Microsoft’s advice, you could disable the fancy UI making your computer look like Windows 2000 and supposedly run much faster.  I never really noticed any difference.  We didn’t have tools like the Windows Experience then.

Then, there was the Blue Screen of Death.  People would complain and laugh about it.  I always figured I was lucky.  It seldom happened to me and, when it did, it generally was because of something stupid I had done with extra pieces of hardware improperly configured or inserted.

Programs were more fun to use with this new interface.  The basic install actually came with a number of applications that would get you through most needs.  It had a great game of Blackjack!  Wordpad could get you through many word processing tasks.  Connect an external modem via a serial cable and you could dial up and get internet connected.  It’s interesting to even think that I could even get satisfaction from some of the very early web applications and browsers.  Even though Windows XP is actually only 12, that’s 84 in dog years and probably a good analogy for how far we’ve come in OS sophistication.

It was the box above that I first dual booted Windows XP and Linux.  I learned a great deal from both operating systems.  There were lots of hacks available to get you to make your computer completely yours.  And, you’d always make sure that you had the original install CD to erase the damage that comes from being too bold.  The concept of an installation partition was years to come.

In the schools, the IT Department loved Windows XP.  They could take a good installation and cripple all the good stuff so that students were protected from themselves.  Imagine a computer with no command prompt.  Tools were at their disposal for fast deployment of system images once they got the “perfect locked down computer”.

Windows XP was a programmer and hacker’s dream operating system.  At the time, it seemed like there was nothing that couldn’t be done.

There will still be people that hang on to theirs.  Over 12 years, so many facets of our society have been built on Windows XP and the software that runs on it.  Even yesterday, I was in town doing some business and the person I was working with had stock blue/green Windows XP.  When I asked her if the company was going to upgrade, the response was why?  This does everything that I need.  I suspect that, despite all the warnings from Microsoft, that there will be lots of people that feel the same way.  For them, there’s plenty of advice.

It won’t happen here.  I’d have to find somewhere to put the things that adorn the top of my desktop computer, open it up, insert my hard drive hoping that I get the connectors right, then find a monitor and wait forever for it to boot and then hope like crazy that I remember the password to the limited or the admin account so that I could get in.

Because of that, I probably will never do so.  I’ll just use something else and fondly reflect back on Windows XP and how much I learned from that operating system.  12 years?  It seems like just yesterday.

Postscript – Apparently, there are options available if you’re not ready to drop XP – Canadian government paying Microsoft $306,625 for XP support