I had a wonderful Saturday.

A few months ago, my friend @Cowpernicus asked to take me out to lunch.  I knew there was something up his sleeve at the time but free food is free food.  Over the lunch, he asked if I would speak to a group of educators at #edcampSWO.  Even though I had suggested a location for the initial edcamp, I wasn’t able to attend last year. But, I made a point to be available this year and I’m glad that I did.

I’ve driven by Tilbury District High School many times in the past but had never gone in.  So, this was like killing two birds with one stone.

The enjoyment to the day actually started minutes upon arrival at the school.  It was like one great reunion of people that I had the pleasure of working with for years and years.  Lots of hugs and handshakes and reminiscing.  After lunch, which was delayed by the group that had slow service at the bowling alley, I had a chance to talk to the group.  I had been told that the talk was going to be simulcast to the group at #edcampldn which was kind of cool.  I have lots of friends from the London area as well.  There were lots of Plan Bs to make this happen – the folks in charge couldn’t get Ustream working for them but Google Hangouts were available and were used.  Next problem was with the camera which didn’t work.  But, in true Canadian fashion, we could make it work with duct tape.  None was found but masking tape stepped up to do the deed.

And it worked.  The highlight for me was to be able to formally recognize the group of CIESC and ELTIP people who I’d worked with for years.  They are an inspiring group, always thirsting for more and better understanding of technology in the classroom, and it was so cool to see some of them at the edcamp.

My talk, to the choirs in Tilbury and London, was about the changing nature of professional learning.  We’ve certainly come a long way from…

… to taking full control over our own learning.  There are so many good, contemporary ways to do that and my call to action to the group was to ask them how they were going to make this happen.

But what would an edcamp be without taking in some learning and discussions?

I had the chance to learn about:

The LKDSB IT Department was on hand to handle the networking needs.  Extra access points were put into place and a completely open, friendly network for the attendees.  I can only imagine what was going through their minds as people whipped out device after device to get connected.  And, they were going to broadcast audio and visual on top of this?

Plans A and B and C and probably more just fell nicely in place in Tilbury.  Hopefully, they had the same success in London.  As you can imagine, Twitter use made the edcamp self-documenting.  I created a couple of Tagboards to keep track of things.

Sadly, the scum of the earth, spammers, managed to insert some garbage into the discussion.  Ignoring them is just part of what going online means.

Andy Forgrave had put together a post gathering information from his location in Eastern Ontario which served to enhance the learning.

If you don’t suffer from motion sickness, you can enjoy this Tagsexplorer. 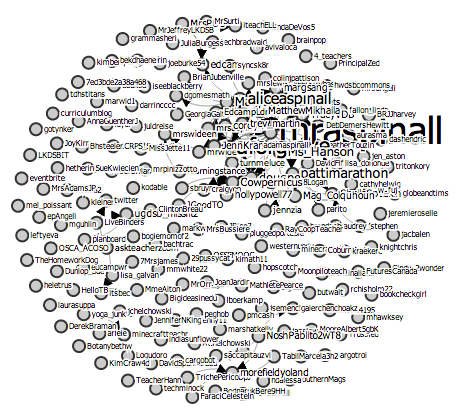 It would come as no surprise that Brian Aspinall was the biggest Tweeter/Promoter for the event.

I did get a very nice framed thank you gift.  I’m still trying to figure out all the connections.

Many thanks for the gift.

I would like to extend my congratulations to the organizers of the two edcamps.  I know that I thoroughly enjoyed the day, learned lots and made some new connections.  From the voices attached to the unconference hashtags, I wasn’t alone.  Whenever you can walk away from a professional learning event feeling that way, it’s got to be a success.

The challenge now will be to make the edcamps in 2015 even better.

Postscript – The edcamp in Tilbury has started at least one new blogger.  Check out the guest post on Brian Aspinall’s blog by Myria Mallette.