It’s time for my weekly wander around the province to see what Ontario Edubloggers are writing.  As always, it’s been a great week curating these things and then culling to share some interesting things in this post.

OK, this could be me.  Nothing I hate worse is going to any kind of meeting and have someone go off on a tangent about a conference they’d attended or a book that they’d read (or more likely skimmed) and I have no idea what they were talking about.  Somehow, it’s comforting to look around the table and see other glassed over eyes.  With some people, it’s OK to interrupt and ask for them to put it in context or give some background.

So, I could really sympathize with the gentleman that Colleen Rose describes in this post.

There’s huge takeaways for everyone here.  Unfortunately, there will be some that will just give you “the look” and then continue.  But, the person who is serious about getting the most for their efforts will take the time to get everyone on the same playing field.  I know that I really appreciate that.  There’s so much to learn that, for anyone to assume that everyone knows everything, not recognizing this is just ludicrous.

I also honed in on the word “training” in Colleen’s post.  That’s key.  I’ve mentioned many times that you train dogs to sit or go outside.  You don’t “train teachers”; there’s no singular phrase that gets my dander up than that one.  And, if it’s truly a professional learning experience, for that gentleman to not be recognized and coached is just malpractice.

See where Colleen takes her discussion in the post.

My Brother is Autistic: Part 1

My Brother is Autistic: Part 2

My Brother is Autistic: Part 3

Royan Lee is one of the most open and transparent individuals that I’ve known.  I’ve had the honour of interviewing him, meeting him and his family, and just have learned so much from his ongoing open learning on social media.  He’s in the middle of at least a four part story about his brother that bares all.

my brother was at the end of his run with public schooling, an ominous time for any family whose child has complex needs.

I’ll confess to never having had to deal with this type of situation in my own family but a couple of instances in my school.  I’m riveted to his series of articles and look forward to the story continuing.

Not too long ago, making videos in the classroom was a fairly involved task.  I can remember the first efforts with the video camera and then finding some way to capture the tape contents to edit the content in a separate program.  When the RCA Small Wonder came along, the whole world changed.  You could take these things everywhere and capture so easily.  The concept of the public service announcements was within the reach of everyone.

Now, it’s even easier with your tablets and phones.  The result is a powerful medium for student publishing.

Peter Cameron shares a couple of videos in this post.  I had to wonder if the College of Teachers would be called in with this public video.

It’s only when you play the video that you realize that they didn’t need calming down – Evan and Logan were giving us tips!

Broadcasting Tips from the Field

Today’s technology also lets you go far beyond the immediate location.  In this video, again shared to YouTube, Marie Swift shares a great video tutorial.  This time, it’s all about becoming a better broadcaster.  I had to smile during the first segment with the clasped hands.  That’s a technique that was taught to me to stop me from flailing my hands about while talking.

It’s a great collection of tips that are certainly shareworthy with students.

In this post, Jennifer Casa-Todd has shared her thoughts about Dotstorming which I think is certainly worthy of attention if you’re a fan of getting feedback from an audience in any of a variety of situations.  A long time ago, there were these clicking devices that were promoted as the next greatest way of promoting metacognition and student voice.  I hated the stupid things; not that it wasn’t an interesting technology but that the software was a bear to operate and getting all the things connected could be a challenge.  Then you had to explain the rules and how they needed to be operated.

On one student placement, one of my teacher candidates was encouraged to use them and he couldn’t get them to work so came up with the next best thing – he had students put their heads on their desks and put their hands up to vote anonymously.  Since the debriefing when the students came back to the Faculty, that’s been my Exhibit A for choosing, testing, and using technology wisely.

The lesson is well worth teaching but technology has got better.  Check out Jennifer’s post for a great collection of ideas. 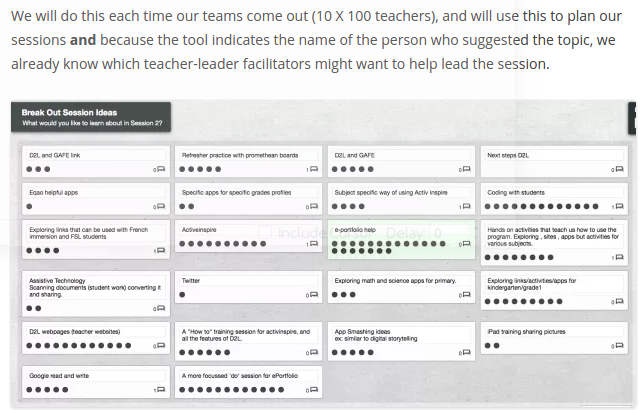 If you weren’t able to attend the OLA SuperConference, Diana Maliszewski has a really good summary of things you mised.  If you’ve never been to this conference, you really need to check it out at least once.  I had the pleasure of presenting once with a local teacher-librarian (who I had a chance to have lunch with this week) and then also was part of the great OSLA faceoff a couple of years ago.

I really enjoyed living the conference through this post so thanks so much for that, Diana.

The highlight for me was this picture of a group that were part of our computer contact network in addition to this work as teacher-librarians.

How Alanna go there is beyond me!  <grin>  But, she would fit in so nicely.

My congratulations go to Sharon in her retirement as well.

Many teachers share their lessons on the web and announce it on social media.  For that, many are so thankful.  Instead of reinventing the wheel, why not share?  A good lesson gets better with many eyes.

In this post, he doesn’t share a resource or a particular lesson, but instead shares his pedagogy, a technique that he calls spiralling.

I thought it was a rather interesting concept.

Why not click over and see what it’s all about and see his inspiration and decide whether there’s a place there for you too.

The genius that comes from Ontario Edublogs never fails to amaze me.

Please take a moment to check out these wonderful offerings and appreciate their efforts.  Then, check out all the Ontario Edubloggers for even more.

3 thoughts on “This Week in Ontario Edublogs”