Hmmm. I wonder what my word count is.

It was less of a concluding note than a call to action to myself to dig into it a bit more.  I went to one of the sites referenced in the image I shared and found this article.  As I was poking around looking at the interesting statistics culled from all over the internet, I was mindful that much of this was directed to people who blog for a living.

I have been asked to blog professionally for companies a couple of times but haven’t taken them up on the opportunity.  That would require a great deal of focus and specific research.

Around here, it’s just a hobby.  It’s a chance to share my ideas on a variety of topics and it’s also an opportunity to see if I can learn to write better.   (notice I didn’t say “gooder”)  The author of that article undoubtedly gets a few pennies for clicks so I guess I contributed to his retirement plan.

Since I had composed yesterday’s post in the new block editor which doesn’t appear to have a word count routine, I had to switch back to the classic editor to realize that that post contained

I then popped the post into another editor I use, Open LiveWriter and got this 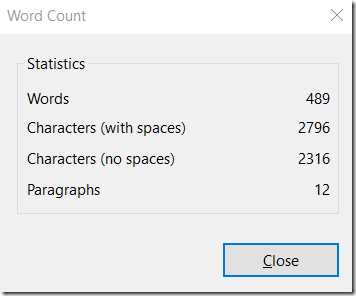 Not exactly the same but pretty darn close.

According to the article, yesterday was smaller than the “average blog post”, whatever that is.

I can tell you that it took considerably less time to write than the 3 hours, 16 minutes suggested.  Maybe it shows?  As for reading time of 37 seconds, who knows?  It’s kind of difficult to judge reading time when you’re the author.  I will say that it took more than 37 seconds to proofread!

The character count was interesting.  If you ever took Grade 9 Typing, later Keyboarding, now non-existent, you know that

That is a cat or a dog

is not seven words.  Think back to your timed writings with the character count in the margin and the arithmetic required to determine your words per minute.

It was also an interesting reflection back on my education.  I hated writing essays and I was firmly in the camp that would always ask

It always seemed appropriate to refer to Abraham Lincoln’s quote but that didn’t work.

Writing essays was hard work and we didn’t want to work a word longer than we had to.  On the other hand, there often was a need for filler to reach the required limit.  It seldom slipped by the teachers though.

I’ve heard other opinions about how long a blog post should be that go beyond the word count.  The suggestion was that it should fit on a computer screen and that you really need to have engaging content to get people to scroll for the rest of it.  I know that my “This Week in Ontario Edublogs” post violates this badly.  But, it’s one that I like to write, I enjoy writing it, and I like reading and re-reading them.  It is a reminder that I’m connected to such powerful thinkers.

As I conclude this post (I’m at 484 words and counting), I’m no closer to a final conclusion.  As I reflect on the post lengths of things on this blog, there are long posts and there are short posts.  The only thread that binds them at times is that I wrote them based on my thinking on that day.  When a post is over and I have shared all my thoughts, I schedule it.  I can’t imagine looking for filler to make it look longer.

In the blogging world, that’s what embedded images are for!

Enjoy this picture of a Christmas tree.

6 thoughts on “About words”