What are you doing this evening?  Perhaps you would be interested in participating in a Twitter chat moderated by the Computer Science Teachers Association’s K-8 Task Group.

It’s timely – what happens beyond the recently concluded #HourOfCode? 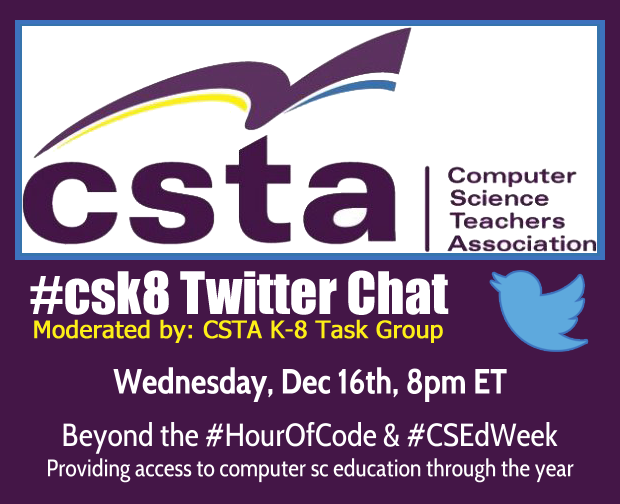 In the past while, there has been considerable excitement and ideas leading up to the 2015 Hour of Code.

Just this morning, I read about the successes that the Superior-Greenstone DSB had enjoyed in this message from Stacey Wallwin.

Thanx for putting us on the #HourOfCode map! 10 PS, 3HS, and over 470 Ss participated! @SGDSBoard Way to go CODERS! pic.twitter.com/JRhDdUQsI4

That’s pretty impressive for a district with 11 elementary schools and 5 secondary schools!

The initial hour has a great deal of support and excitement.

What comes next?  Join the chat and get some ideas.

The initial hour has a great deal of support and excitement.

What comes next?  Join the chat and get some ideas.

The content of this blog is generated by whatever strikes my fancy at any given point. It might be computers, weather, political, or something else in nature. I experiment and comment a lot on things so don't take anything here too seriously; I might change my mind a day later but what you read is my thought and opinion at the time I wrote it! My personal website is at: http://www.dougpeterson.ca Follow me on Twitter: http://www.twitter.com/dougpete I'm bookmarking things at: http://www.diigo.com/user/dougpete View more posts

One thought on “What next?”