One of the really neat things on Facebook is its ability to share “memories” from the past with you.  They could be stories, mentions, or pictures.

Within the past week, this one appeared. 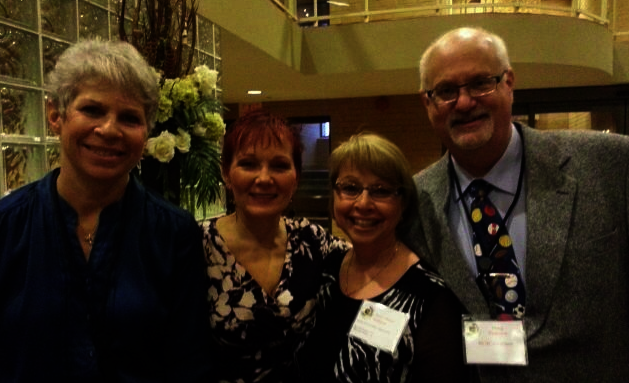 It was with some very dear friends at the Western Region RCAC Symposium a couple of years ago.  And, who knows?  It may be the last one.  There hasn’t been one for the past couple of years.  It was always planned for the first week of December.

Two things always happened that week.  1) Faculty of Education students from Western were out on placement and 2) London would get a huge snowfall.

Don’t believe me?  Here’s a picture of Kerry and me along with keynote of one conference, David Pogue, trying to dig my car out from a drift. 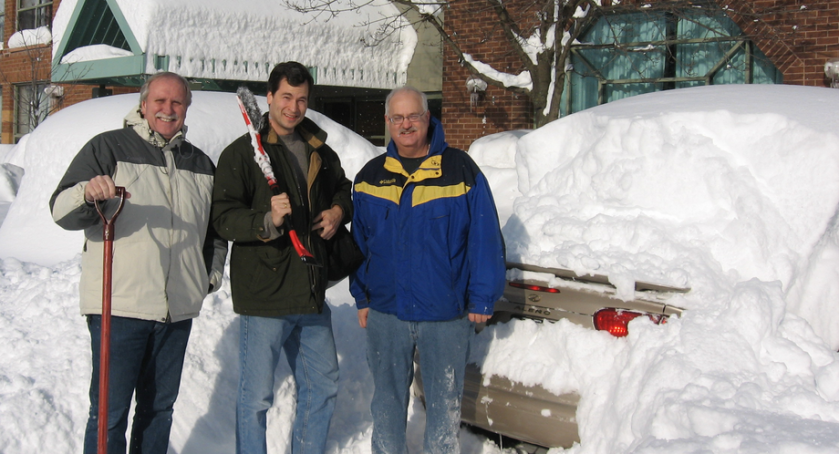 The Symposium was a big event for the Western RCAC.  It happened once a year, was a one day event, and was basically all about sharing good ideas about things happening in the Western Ontario region.

The Symposium preceded my time on the committee.  In the beginning, it was held at the Faculty of Education, hence the timing.  Since the students were out on practicum, the classrooms were available for the day.  We would wait until 10pm on the Thursday and, after the AQ courses had left, set up, grabbed a quick nap and then the conference was on the Friday.  Eventually, the event outgrew the facilities there and we moved to the Lamplighter Inn.  After a few years, we outgrew that and had to move to the London Convention Centre.  The Lamplighter built an addition and we were back there since it was quick and easy access to the 401 and it was such a wonderful setting.

The Inn really did things up nicely for the holidays.  There were poinsettia trees and little drummer boys that we were able to move around and set up a holiday feeling to the event.  The meals were spectacular and their recipe for bread pudding was out of this world.  The symposium itself was unique.  We ended up with a wonderful formula with two keynote speakers who did a smaller breakout after their address so that they could do a Q&A with those inspired by their message or to talk about a different topic.  Where possible, we tried to make sure that one of the keynote speakers was Canadian and that one of the keynote speakers was female.

The breakout sessions were unique as well.  There was no call for proposals.  Instead, members of the RCAC constituent boards would nominate people from their districts who were doing something innovative, insightful, or complete and it was a chance to showcase their efforts in front of colleagues from the region.  We liked to think that it made the initiatives directly replicable, if desired.  Since all the districts are roughly within a day’s driving, it made follow up school visits possible as well.  The formula seemed to be a success for us and a few of the districts that weren’t part of the London district joined the group to be part of it.  The importance of it being regional can’t be overlooked; I know that my superintendent used to book a bus and send it full of educators for this one great day of learning.  There was no vendor area although many of the traditional vendors enjoyed attending so that they could talk about things other than selling “stuff”.  Many times, we got kudos from them for inclusion in the learning.  Of course, we didn’t say no to the donation of a door prize or two.  A popular, ongoing feature of the conference, was the presentation of the latest titles licensed by OSAPAC>  Everyone in attendance got the information at the same time.  None of the – oh, that’s licensed?  I didn’t know that.

The Western RCAC group that organized it was pretty special for learning in itself.  Composed of the computer consultants and technology leaders from the region, we met four times a year.  The agenda itself was pretty flexible.  In many ways, the meeting was much like the edCamps of today.  The agenda was driven by those in attendance and focused on what was of current interest.  A good friend of mine called it “enlightened self-interest”.

The committee itself was very generous.  We had a resources committee and they collected handouts, presentations, and professional materials that we created and shared at meetings.  They were all made available to everyone.  After all, if you’re doing a workshop on a particular topic, why should you have to create it yourself from scratch?  It was share and share alike.

I learned so much from others in this format.  In the meetings, there really wasn’t a head of the table although someone had to start the meeting, tell us when to break for lunch, and to let us know when the day was done.  Other than that, it was pure learning and sharing.  There was the occasional guest but, for the most part, it was just us.

The picture that appeared in my timeline brought back very fond memories.  I think that the school districts involved were the real winners.  For the price of one or two consultants, they got the wit and wisdom of an entire region of the province.  The group put together what was described once to me as “the singular best professional development session I’ve attended in 30 years in education”.  It doesn’t get much better than that.  It wasn’t a huge conference by conference standards; I think the biggest was 400 people.  But, the learning and the ideas were amazing.

Sadly, it hasn’t been offered for the past couple of years.  I hope that the minds that be reminisce of the value of a group of people getting together to learn and share and bring it back.  Like so many things, though, if it stays off the radar for too long, the formula for success will go away.  I’d sure hate to see that happen.