Part of the problem of having so many programming environments is that you can’t remember them all.  Yes, there are big lists but the reality is that you typically get really comfortable with one or two and take it from there.

That doesn’t mean that you can’t keep your eyes open.

This morning, I read a post from the ACSE discussion list where Ontario Educator Justin Yantho had waded into a discussion about the best way to teach OOP principles to students.  In his reply, he made reference to a Trinket resource that he had created to share with a group of elementary teachers interested in learning coding beyond blocks.

Of course, I had to check it out.

I thought that Justin had done a good job of providing code for the learners.  Even more impressive was the documentation provided at the bottom for the learners.  If you had difficulties working through and modifying his examples, you could read about what the code was doing.  That’s so important. 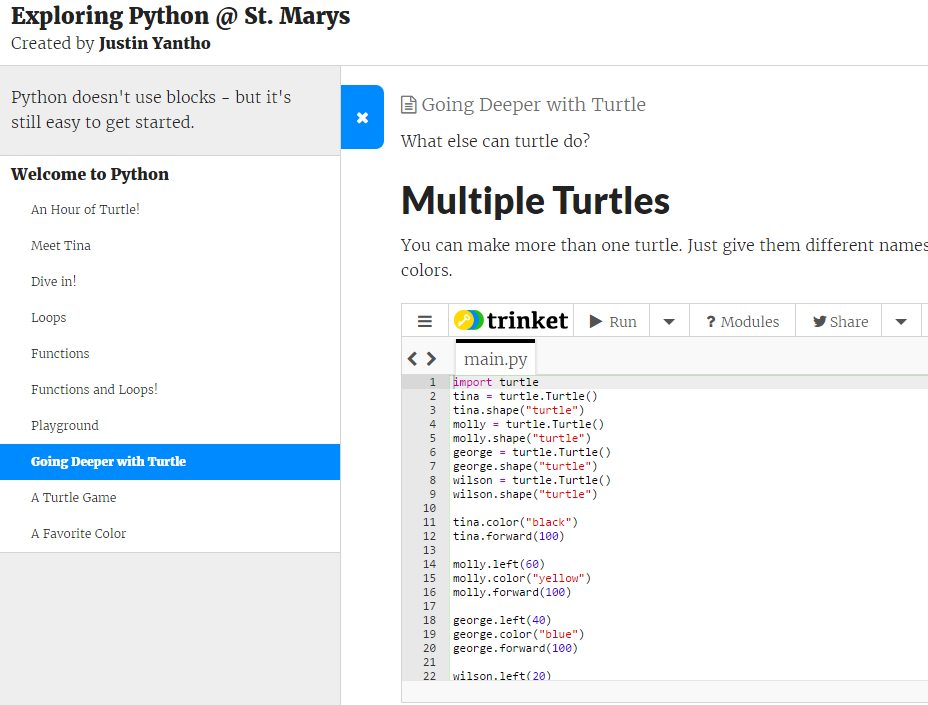 At the point of the screen capture above, my memory cells kicked in.

I’d worked in this environment before.  But where and when?

The power of blogging is that, if you’ve blogged about it, it’s there somewhere.  So, I did a search for Trinket and I had in fact blogged about their Hour of Code example almost two years ago.  It was called “Python with Ease“.

Somehow, I felt good about the fact that I had remembered.  Somehow, I felt bad that I had gone this far through Justin’s tutorial before I realized it.  Maybe I should do my morning reading later in the day when I’m fully awake.

Regardless, it is in interesting and well-created tutorial.  It’s definitely worth a look for understanding and evaluating to see if it fits into your introduction to coding plans.