At the ISTE Conference this year, a revised version of the ISTE Standards for Educators has been made available. 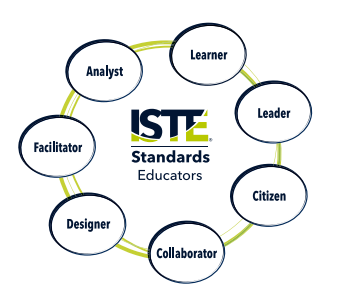 You need to register for a free account and give ISTE an idea of your teaching status and what you plan to use the standards for.  In my mind, there are so many opportunities.

Now, the standards aren’t enforceable on Ontario Educators but there is no equivalent here.  Our focus is largely on good teaching principles and there should be no apologies for that.  However, these standards mesh nicely with those who wish to be well rounded educators, advocates, leaders, and learners.

What stands out for me are the concepts of:

The actual document is a short read and a quick skim if you’re so inclined.  But, if you’re serious about this, each of the points in the document should serve as a launch pad to your own personal approach and philosophy of teaching and teaching effectively with the use of technology.

Beyond that, there’s a very serious message for school districts.  With a workload that is absolutely full, teachers can’t be expected to do all this on their own.  A comprehensive system of support and professional learning opportunities will support educators in their quest.  Professional learning departments should sit back and ask themselves if they’re providing the environment and setting the table for educators to enjoy success.  Are you providing opportunities for classroom teachers to learn and become leaders?

For the educator, I think that the standards provide a wonderful guide to designing a portfolio of learning.  Can you provide personal examples of proof and comment on each of the standards as they relate to you?  If not, does this provide a framework for your own learning this summer and to the future?

Are you the “Empowered Professional?”

I’m one of the legions of people that are not in San Antonio for the annual ISTE technology conference.  It’s not that I don’t enjoy going; I’ve been to my share – Minneapolis, Chicago, Denver, Seattle, New Orleans, Atlanta, Philadelphia, San Diego, and San Antonio more than once.  I may have forgotten a couple locations.  That’s the problem with lists.  I even got the ghost room in San Antonio when I was last there.  Of course, I blogged about it.  On a previous San Antonio conference, I got material for a Photoshop workshop; taking a picture of the famous building but there was work being done and a worker on a ladder spoiled the picture.  We learned how to edit the person out.

What’s unique about this conference is that it’s at a horrible time for Ontario Educators.  It’s typically held during the last week of classes.  You have to pull in a few favours in order to make attendance possible.  Or, if you’re supporting Report Cards, you have to promise to forego some opportunities and go online in the evenings in order to attend.

The exhibit hall is always interesting.  It’s a mixture of tried and true technology and a look at shiny, new things.  It’s an opportunity for technology firms to make a big influence on educators – like convincing them that you don’t need a keyboard on a computer to make it in a classroom, or you don’t need lots of local storage when you have the cloud, or robots can be round and very programmable.  There are lots of other things that were touted as the “next best thing” that never quite cut it.  Discerning educators and decision makers need to think deeply before going off the deep end.

Then, there are the speakers.  Ultimately, here is where you get the new information, the new insights, the cautions, the flavour of the year, the message of what changed a particular class, …

So often, the presenters are names that you have never heard of.  They may be local or from a distance and this may be their one and only time in the spotlight.  The message is true, honest, and authentic coming from experience in their own little world.  I like to think that the presentations I made there put me in that category.

Then, there’s a category of speaker that makes trips throughout the country delivering the same presentation either as a breakout person or a featured/keynote speaker.  Many are not educators but they deliver a message that some want to hear.  “600 apps in 60 sessions”, “what’s new at Google/Apple/Microsoft?”, etc.

And then, there is another category of speaker that most appeals to me.  They may not necessarily be “in the classroom” educators but they’ve been involved in the deep thinking behind the things that we take for granted.  What’s special about this group is that they’re not there to sell anything but good ideas and common sense.  They become a Doug-Magnet.  I took a wander through the online program and I see some of these people again there to guide a conference of educators.  Oops.  I just started a list and deliberately deleted it.  The danger in lists lies in excluding someone.  But it’s worth noting that Gary Stager is presenting at his 30th ISTE Conference.

The one common thread that runs through this, and any conference that offers variety, is not being able to attend them all.  Sure, some of the presenters are good enough to post their presentation online.  It’s nice but certainly not the same as being there.

It would be nice if there was a magic bullet that allowed anyone to have it all.  I’ve tried; it’s just not there.  The best I can do is suggest our old friend Twitter and rely on the kindness of learners/attendees.  It should be a requirement of anyone who receives funding to go to a conference.  Learning and sharing all around!

If only people would use them (and only them)!

And, what would a technology conference be without a little advice…

🔍 Save a search that includes tweets that contain any of the hashtags you input. Great for #ISTE2017 #ISTE17 #NOTatISTE #NOTatISTE17 👍 pic.twitter.com/LyV0TRyWKG