Welcome to the last TWIOE in June and the school year.  As always, there is some inspirational content written by Ontario Educators.  Perhaps you’ll be inspired to start or re-start your own blog this summer if you’re not already a regular writer?

File this post from Laura Bottrell on the Heart and Art Blog under “maybe I’ve been doing things wrong all this time”.

For many, it’s been a month (or more) of counting down until today.  I even remember a colleague who shared the countdown on his blackboard for all to see.

Laura reminds us that this countdown may not necessarily be exciting for everyone in the class.

I always thought that celebrating the end of the year was just adding to the fun and excitement of summer. I’ve always had a fun countdown for my class. Lately, I’ve been wondering if this is just adding stress on some of my students. It really hit me last week when I announced that we only had ten school days left and there were at least five children in my class that crumbled to tears.

Her suggestion turns the table and has you thinking about treating things differently.  A little late for this year perhaps but … it’s nice to have a reminder that things aren’t always what they seem.

Why do you want kids to code?

With apologies to Jim Cash, I read the title to this post a little too quickly.  Instead of “Why”, I read it as “What” and thought that it might be about some new things to code!

However, using the word “Why” changes everything.  Jim summarizes his thoughts in this graphic he created. 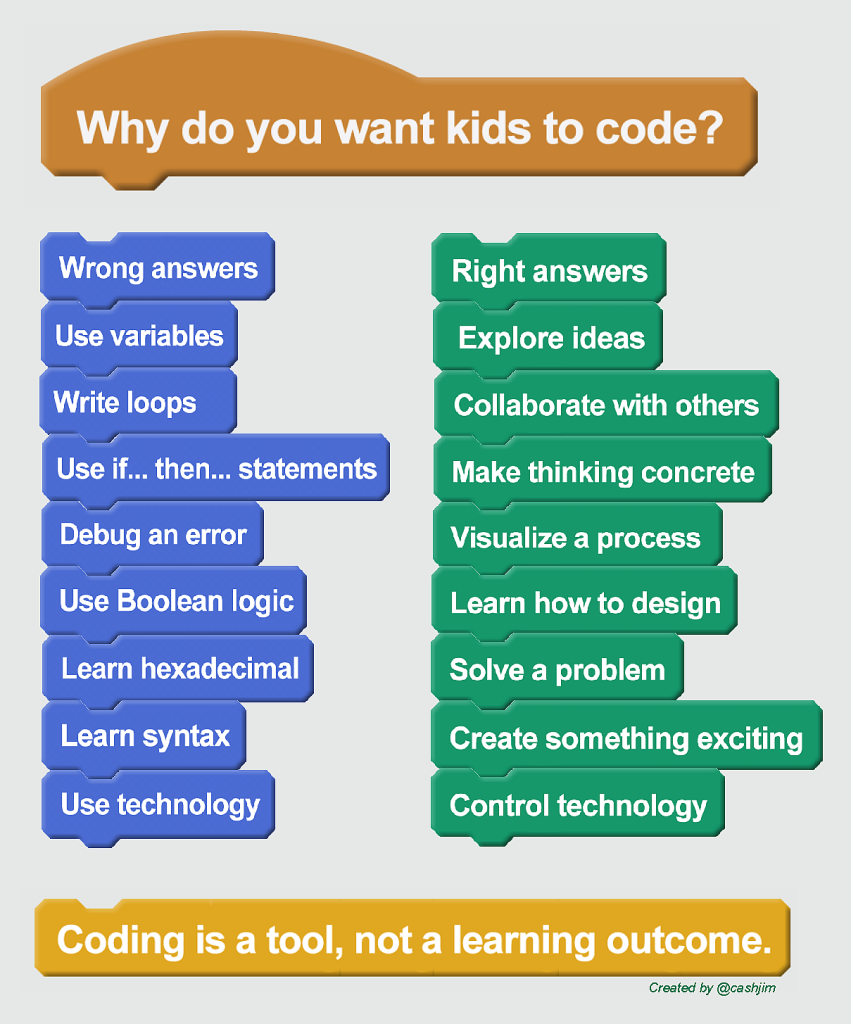 I understand his message but I also wonder if I’m on the same page with him because of having a background in programming.  As Jim correctly notes, there’s a certain bandwagon effect about coding that has people jumping on because it’s felt that it’s important or someone is keynoting about the cool things that kids are doing.

Coding goes well beyond the mechanics of getting the job done.  (Blue side) Until you’re looking at the big picture, you’re not doing it justice.  (Green side)

It would be interesting to find out how many people get pressured to “do coding” because it’s the latest thing and yet they may be doing it without a suitable background in coding. 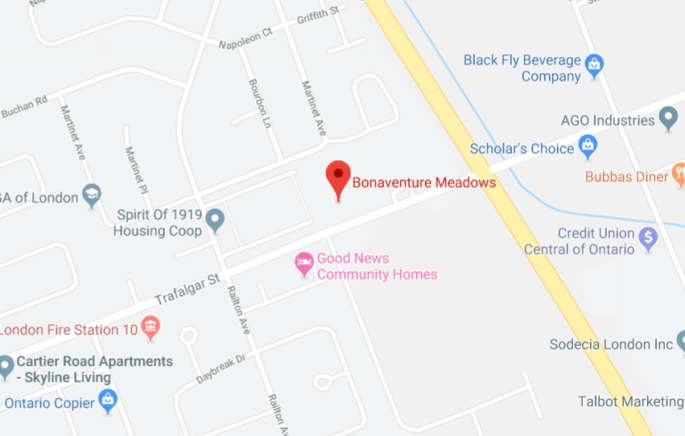 It looks easy enough to get to.  (at least by driving)

Getting to the actual school placed David in a series of job interviews and he shares his reflections about that process in the post.  I can understand the need for standardized questions for all applicants for fairness.

But, the school really needs to be prepared to take advantage of the skills that David has refined over his time as a learning coordinator.

Maybe instead of “Go Magic!”, should read “Get ready, Magic”.

And, then there’s the whole Plugged-in Portable thing?  I guess we’ll find out in the future.

I read this post from Stepan Pruchnicky a few times and I absolutely understood his message.

In Language, it’s important to read and understand different texts.  The concept of reading a script was a new spin on it.  But, as Stepan digs into it, it has to potential to go very deep, rich in understanding and empathy for characters to be played in the script.

It was during the radio version of This Week in Ontario Edublogs and Stephen Hurley’s comments about the connections to David Booth and Stephen’s own experience that really put me over the top with the concept.

I’d suggest putting Stepan’s post on your list for summer reading.  This is an idea that could really generate mileage for you.  Perhaps a future post would recommend suitable scripts?

Of course it is, Ruthie Sloan.

But, I certainly haven’t thought about it as deeply as you explore in this post.

You take the notion of context and apply it to…

The post is a great discussion about each of these.

It’s also a reminder of so many things that may just pass us by as life goes on.  These are things that we do every day.  It goes beyond what and moves into how, when, and who.

I loved the collection of images that she includes at the bottom.

“I Don’t Have Time For That”

Joel McLean reminds us that this comes up too often when people are wondering about taking charge of their own professional learning.  I suggest that it’s an easy answer and often given to avoid things.

I also am reminded about my Covey training.  The first rule – schedule the important things first.  Then, let all of the other stuff fill your time for you.  Goodness know that, in education, there’s no danger of that not happening.

I remember also returning from my training and explaining the approach to my supervisor.  We still meet for coffee every now and again and he notes how this changed his professional life.  (Not my comment but after my experience, he went and took the course himself.)

There was only one caveat to my own implementation – I was never allowed to allow my priorities to supersede his priorities for me!  I shouldn’t have encouraged him to take the course.

Maybe Joel has some advice for how to handle that!

Observations & Conversations : Part 1 of many?

The structure of the Interstitial App, or, Observations & Conversations – Part 2

From Cal Armstrong, a pair or posts and maybe more to come.

After my session at the OAME Conference (link to Presentation), a few folks asked me how I had put this together, so I’m going to give a brief run-down here.

It sounds like the audience was really impressed with Cal’s use of Microsoft Powerapps.

I know that I was; I’d heard about it but really hadn’t done anything with it.  I guess that you need to have a reason and Cal used his mathematics audience as the target for his presentation.

If you’re curious, read both posts.  If you’re interested in creating your own, pay attention to the second post.  Here, Cal takes you through his process step by step.

And there’s your last day of school inspiration.

If you read it anywhere else, you’re not reading the original.