I read about the announcements from Apple yesterday with interest.  It’s not that I’m sitting on a pot of gold here waiting to buy the latest and shiniest though.  It’s just a chance to see how Apple will push the world forward in technology use and ideas and also a chance to see them catch up with others.

My biggest interest was in what I would call catch up and that was the promised news service.  I admit that I’m a news junky and was really curious.  Off I went to the App Store and I couldn’t find it.  I grabbed my iPad and looked at the store there and nada.

I wasn’t terribly surprised; often it takes a day or two for things to trickle down to we Canadians.  The price of Apple News+ is listed at $9.99/month which, of course, is American dollars.  If you’ve ever downloaded a song for iTunes, you know that it takes a few more pennies Canadian to do the deed.

So, I was going to wait a couple of days but then wondered if I wasn’t missing a web version.  I actually just guessed that it might be at http://news.apple.com and it turned out I was correct.

I forgot this was Apple.  Every new feature requires a rewrite of the operating system!  Here’s where I stand as I begin to write this post.  2.5 GB to use a new application.  Hopefully, the standard “bug fixes and enhancements” also apply.

Even after I download it, and apply the update, there’s no guarantee that it’s going to be available in Canada but I’m 1/2 a gig into it so will finish.

It’s not that I need another news program.  Followers of me know that I’m up early and reading things in Flipboard, News 360, Opera Personal News, and of course, my Old Reader collection.  But still, a new player on the market deserves at least a click or two (and a download).

I’ve rebooted and am back to the news site.  When I click the “Try Apple News+” button, I’m prompted to see if I approve the opening of the application.  I did a quick check and, yes, there is now a News application in my applications folder.

Upon opening, there are a number of default channels – obviously it knows that I’m from Canada and it comes pre-configured for Canadian Politics and NHL Hockey.  How cliche.  No CFL Football?

Ah, but I can search for additional channels or topics.  Of course, I had to add Education and Educational Technology.

I could add some of my, er, Favourites… 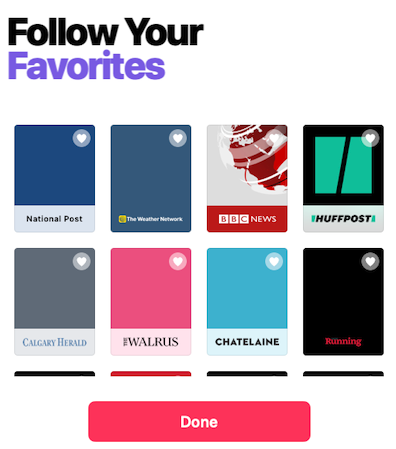 And a bit of preferences to change.

It was interesting to poke around.  There is the promised News+ section which will be the paid upgrade.  Disappointingly, for the way I read the news, I couldn’t find a way to share the stories that I’m reading to my social networks.  There is the traditional Apple sharing menu amongst Apple things that are on my computer.

Heading back and poking around, there clearly is a Mac OS and an iOS application.  There’s nothing about the program that runs on the web.  That cuts out much of my reading routine because I’m not always using my MacBook Pro.  Plus, I do like the sharing with others aspect of what I do when I’m reading.  The best I could come up with is to use the “Open with Safari” option (which actually opened my default browser which isn’t Safari) and from there I could share.  It’s just a couple of extra steps.

Navigation was slick; the navigation menu was in a dark mode in the left pane with the content appearing as the publisher intended in the right.

In summary, it is an Apple application and designed to keep you in the Apple environment and not out in the open on the web.  I’ve taken a quick wander around the News+ section.  Given the limitations above, from my perspective, paying for access for stories might well be the saving factor for the program.  So much of the other functionality exists already in other places.