According to my Twitter page, I joined the social sharing network in 2007. 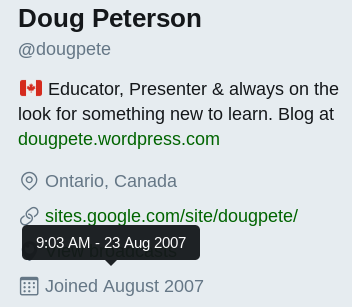 I was probably in some summer institute at the time.  One of the first people that I do remember interacting with was Rodd Lucier (@thecleversheep) who was a big advocate for learning and social networking.

So, I created the account, now what?  As we know, Twitter is essentially nothing until you follow people.  It would seem intuitive that you could just post a Twitter message asking for advice but it really doesn’t work well that way.  In order for someone to reply to you, they need to know that you exist!

Fortunately, at the time, Twitter was kind of new and there were lots of blog posts about who to follow in Twitter so I started adding names from these recommendations.  I was off.

I do recall that the names that I followed were kind of interesting but not necessarily in an Ontario or Canadian way.  Either I wasn’t following the right people or the right people weren’t on the network.  So, I plugged along with the ones that I did follow and kept looking for more.

It was a home thing for me in the beginning.  Twitter and all social networks were blocked at work.  I did go to work on that and had that removed.  It’s great to see so many educators from my district now online.

Fast forward to today.  My, things have changed.  There are so many people online now.  The challenge remains, though, to make some sense of relevancy to it.  People use the service for a variety of reasons; you just have to find the ones that are of value to you.  If you’re serious about this, it’s not just about finding folks that agree with you.  There can be great value in finding someone who has a different perspective.  You can influence them or they can influence you.

So, this week, Derek Rhodenizer put out this challenge.

It’s day 3 of the kindness challenge! #VoicEdGratitude
Today we are asking you to find an educator that is new to twitter and urge your followers to support them.
Let’s share the love#GrowPLN pic.twitter.com/iBjQJmv7ZO

So, the ball is in that new person’s court.

But everyone is busy.  Is picking up Twitter something else to do on an overcrowded teaching load?  In my opinion, the newbie (and we all were at one time) needs immediate success to validate that the time and effort is going to be worthwhile.

Some suggestions that come to my mind…

How about those blog posts of “people to follow”?  They had value in its time but those posts are still active.  The people, though, may no longer be active.  There’s no success when you find dormant accounts.

The key to helping the new user is to give them immediate success.  There are lots of ways to do it.

My suggestions appear above.  What can you add to the list?