Readings (You can follow my daily readings as they happen here.  Here are a selected few from the past week.)

Blog Posts on doug … off the record

My on demand page can be found here.  The latest edition features blog posts from:

Two Clicks – With the last update to ChromeOS, or as near as I can figure, there is now an annoying problem.  It takes two clicks to close a tab instead of the usual one.  It doesn’t happen in Chrome, the browser.  Just Chrome, the browser on Chrome OS.

It’s a small thing but when you open and close a number of tabs during your workflow, it becomes a big problem.

Tab Crashing –  I had a problem with tabs crashing in Google Chrome when I would wake the computer.  Yes, I rebooted.  The problem followed.

I figured that the problem was probably in an extension and I was right.  I deleted all of the extensions and then added them back one by one until I found the one that was crashing things.  I deleted it and I’m happy again.

Video of the Week – From “This Week in Ontario Edublogs”

Stephen Hurley called it the greatest song that mentions education…

My Favourite Photo This Week

The babies have arrived.  Mom Robin took some encouraging to move from the nest and was either complaining to me or telling the babies not to smile. 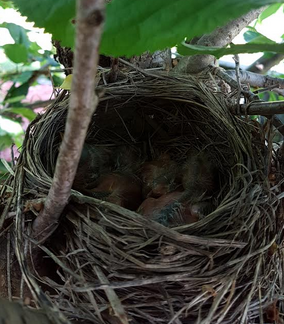