On the topic of curiosity and wondering, I read this post from the MSN network that Alfred Thompson shared yesterday.

I asked Siri, Alexa and Google Assistant if they’re spying on me — here’s what they said

It should come as no surprise that they all denied spying.  I mean, seriously, if you were, would you admit it?

Missing from this list of digital assistants was Cortana.  Do I smell a cover up here?

Off I went to test this theory.

“Cortana, are you spying on me?”

Well, there went the scoop of the century.  None of the devices admitted guilt.

Now, any parent who has more than one child or any classroom teacher with stick-to-it-ive-ness knows that you don’t stop there.  If you apply enough pressure and are persistent, eventually someone will rat out one of the others.

So, I started with Siri – only because I happened to be using my MacBook Pro at the time.

“Is Google Assistant spying on me?”

I found it interesting that Siri did what we all do when we don’t know the answer – it searches for it.  It wasn’t very helpful except to note that the same article was published by different sources. 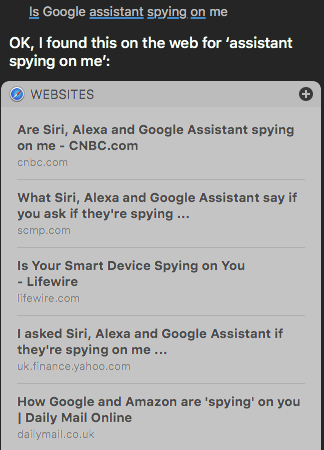 I expected the same results for Cortana but was a tad surprised at the answer!

“Is Cortana spying on me?”

Now, a little more information or detail would have been helpful.  At least, I should get two points for asking an interesting question.  Maybe Siri is going somewhere to think this through?

It was raining so I went through a number of different combinations asking the assistants to squeal on each other.  As noted in the original article, the Google assistant would only talk about itself and then send me to the web when I asked about the others.  Ditto for Cortana only the destination was Bing.

When you think about it though, perhaps the word “spying” is a tad harsh.  Its interpretation is in the ears of whoever wants to do an interpretation.

n. pl. spies (spīz)
1. One who secretly collects information concerning the enemies of a government or group.
2. One who secretly collects information for a business about one or more of its competitors.
3. One who secretly keeps watch on another or others.
v. spied (spīd), spy·ing, spies (spīz)
v.tr.
1. To watch or observe secretly: was sent to spy out the enemy camp.
2. To discover by close observation: “[They] are continually prowling about on all three decks, eager to spy out iniquities” (Herman Melville).
3. To catch sight of; see: spied the ship on the horizon.

What if I changed the wording a bit, Siri?

I’ll take that as a yes.

When I asked Cortana, I was told that I was

Coming in loud and clear

And Google Assistant was a little more conversational…

So, what have I learned today:

Since this is a Wednesday, I’ll be going live on voicEd Radio in a few hours, what does Siri know about voicEd Radio?