Last night about 8:00 (which is close, it was exactly 8:01), I was working on a spreadsheet of volunteers for this summers CSTA Conference.

I heard this rumble.  By itself, that wasn’t a new occurrence around here.  We live on a concession road and so it’s just business as usual for trucks and cars to zoom by at 80 km/h or better.  The road isn’t all that smooth and so there’s a usual rumbling that you hear.  That’s what I thought I heard last night.

Except that it wasn’t the short duration that would come from a truck going by.  It just kept going and then all of a sudden there was a loud BANG and the house shook.  My first thought was that a couple of trucks had collided at the end of driveway.  I hope nobody was hurt; better go check.

So, I did what anyone would do.  I walked to the end of driveway and looked both ways and saw nothing.  (Except for other neighbours who were doing the same thing!)  The coast being apparently clear, I went back into the house.  Jaimie had a strange look on his face similar to the one when it’s walk time but it’s raining.  Master do something.  So, I pet him.  That seemed to do the trick for him but I still was no closer to knowing what was going on.

I did what every connected person does these days.  I turned to Twitter and did a simple search for “Amherstburg”.  It was comforting to know that we weren’t alone.  My friend @margsang from just over yonder had heard and felt it too.  I expanded my geography and people were talking about it in “Leamington”, “Belle River”, “Essex”, “LaSalle”, and “Windsor”.  What the heck?  It had to be something.  Zombie apocalypse or earthquake?

I decided to go conservative and looked for earthquake.  Sure enough. 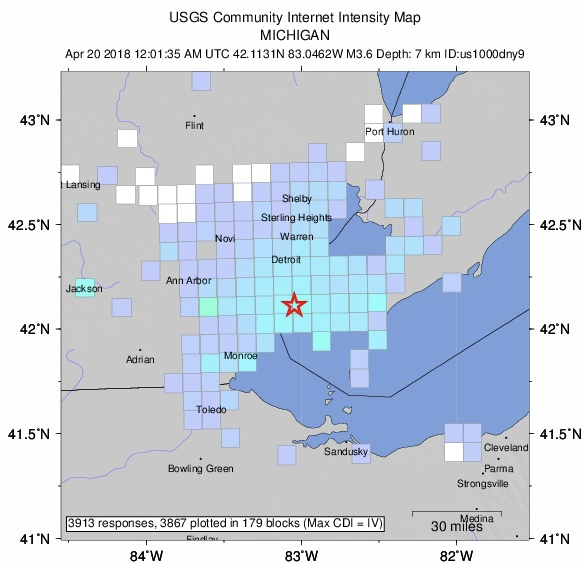 There’s something freaky when you see a star like that hovering pretty close to where you are!

I found the site fascinating and, ever the inquirer, poked around at all the information that was available.  I was comforted that this was only a 3.6.  I can’t imagine what a stronger one would feel like or sound like.

A bigger concern was how would this affect the Fermi II nuclear plant in Monroe.  According to the colour scheme in the map above, they felt the same thing that we did.  But, a phone call later in the evening from Amherstburg emergency services and in the report from Windsor Star this morning indicated that Fermi was shut down.

The other concern was after shocks.  Yes, I paid attention in Geography class.  I’m happy to report that they were either non-existent or too weak to feel.

I did zoom in and checked out where the actual epicentre was.  Thankfully, it wasn’t under our house but a couple of concession roads over.  I took a drive by it this morning, having no idea what I was looking for, and came back none the wiser.  There is a winery really close to the spot; undoubtedly the wine got a shaking.  I do wonder if any of the farms have wells that might have been affected.

Since we don’t like it an area that’s prone for this type of thing, I have a real insight now and an appreciation for those that do.  I can now add “earthquake” to the list of Ontario weather things from Sue Kwiecien.

There’s my major learning for yesterday.  If I don’t go through it again, I won’t be disappointed.

6 thoughts on “I now know what an earthquake feels like”