I don’t play a lot of people on Words with Friends but just a few to have some fun and to stay connected.  Oh, and the odd challenge or smash talking over words.

There are some people that can beat me with their eyes closed it seems.  For the most part, my games are fairly competitive.  I used to play it on my iPad but it’s so slow and crashes with applications that I seldom do anything with it.  Instead, I have moved to an old Android Smartphone which makes for an excellent replacement.

In the beginning, I thought that both of the games were the same.  Except that the Android versus had some new features, including daily coins, etc.  Since I started playing the game without them, I don’t use them and apparently have reached the maximum that you can collect.

I just enjoy playing the game.

I enjoy it even more with a new feature that showed up recently.  It’s a challenge to play against famous explorers. 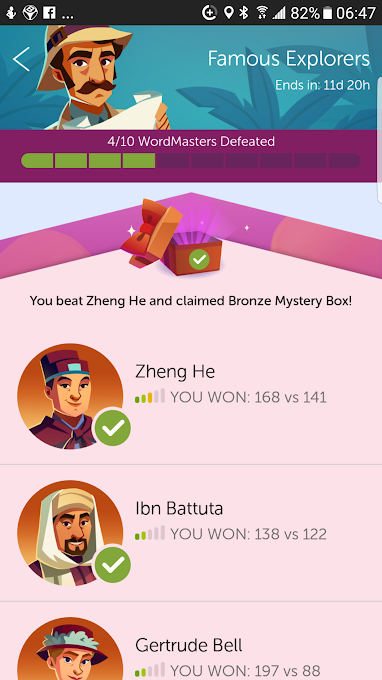 Quite honestly, I had ignored the link until yesterday when it was pretty crumby weather around here and I was looking for something to do.  Lots of people beat me; why not let some AI get some gratitude on me.

I was surprised that the game board was a little different from normal which made for a more interesting game.  But my curiosity went over the top when I checked out the names of the explorers that I was playing.  I do remember studying Magellan in school but the rest were new to me.

So, I did what any curious learner would do.  I searched for them and did some engaging reading about each.  I love it!

Is this learning by happenstance?  Probably but I found it really interesting to head off on these tangents.

According to the scale, these were easy people to play against but that’s OK.  As I head up the ladder, there are more difficult players in my future.

Better than that though, there’s some new history to learn about and you can’t beat that.