If you are thinking fashion, no.  If you’re thinking record albums, you’re with me.

Inspired by Tim King’s chronology of media, I took a step back a little further than he did and started to think about my assortment of vinyl records.  I still have a good collection.

It started in high school.  I could never do homework without some sort of background music.  I know that the common logic at the time was that it was distracting.  For me, it was the exact opposite.  Having music in the background somehow allowed me to focus on what I was studying/doing.  My worst performances came during formal tests and examinations where quiet was strictly enforced.  In fact, as I write this post, I have a music channel turned on, on the television.

Moving to university, I had a roommate who had an incredible collection of records although he could have adopted any of the other forms of media available.  I learned so much from him about the care and feeding of records!  It carried over to my own habits for their use.

Being university-poor, it wasn’t uncommon for us to go to Market Square in Kitchener and just walk around wishing we could have this and that and that and …  One of our stopping places was a stereo store.  Where it exactly was and what name are long forgotten.  I just remember that you had to go below screen level to get to it.  We’d go in there and enjoy music on their high end equipment.  The sound was perfect!

Between my roommate and the sales people at the store, I learned a few habits to make for the perfect listening of records.  While they appear to be very durable, the music they contained could easily be distorted if you didn’t treat them properly.

In doing the extensive research for this posting (i.e. a DuckDuckGo search), Angel’s sleeves are actually now a thing for a type of women’s clothing.  Sigh.

But there was a time … 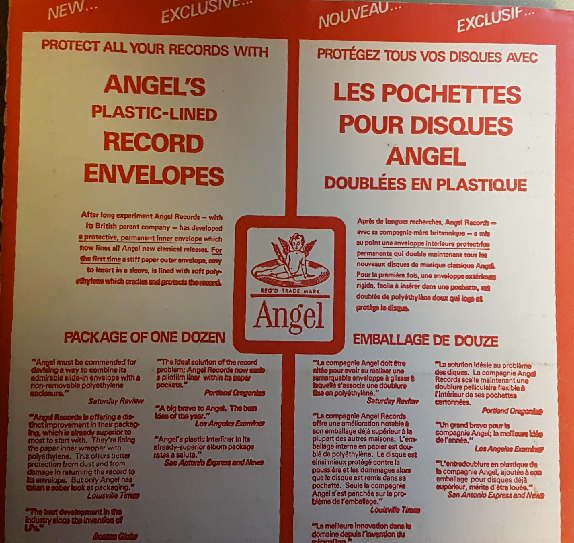 Another tip.  Buy yourself an album every week.  Before long, you’ll have a great collection.  I wasn’t able to do this but did buy as frequently as I could afford.  It meant a trip to the record aisle in Kmart in downtown Waterloo or later Sam the Record Man in Toronto.  It was there that I got a prized item for lights off Saturday nights – recordings of The Shadow shows with Agnes Moorehead and Orson Welles.  Unlike television, the action was in your mind.

How about you for this Sunday morning?

Thanks, Tim, for your post.  I’ve milked it for a bit of blogging and thinking inspiration.

If you have an idea for a “Whatever happened to …” post, please leave it in the Padlet.  If you enjoyed this post, please share it with others.

All of the articles in this series can be found here.

2 thoughts on “Whatever happened to …”