This suggestion comes from the “Whatever happened to …” Padlet. 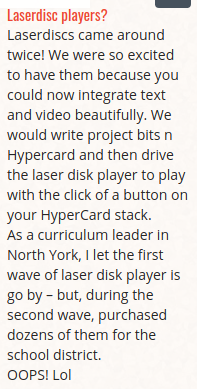 And, I think I know who the anonymous donor of the idea is.  While I do know some of the curriculum leaders from North York, the use of “North York”, “Laserdisc”,  “Hypercard”, and “Lol” can only lead me to one conclusion.

This may be a technology you young ‘uns may be unfamiliar with so I grabbed this image to demonstrate. 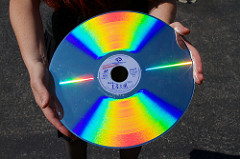 No, it’s not a CD or DVD.  It’s much larger than that.  In fact, the media in this case is about the size of an LP record.

At the time, it was touted as the latest and greatest in multimedia.  I saw a demonstration at a MACUL Conference and was intrigued.  You had to have a laserdisc player (about the size of another memory long forgotten – the VCR player) to play it.  It was a technology that you needed to be careful with in the classroom because the tray, when ejected, was pretty big and clunky and you lived in the fear that it might break off.  All that you had to do is put the laserdisc into the player much like a CD close the disk and press play.  The output would be sent to an attached TV for viewing.  There were a number of manufacturers in the business; I recall Pioneer as one maker.

Why does this bring back memories?

Because, like Mr. Anonymous, I purchased some for my district as well.  We didn’t have the big budget of a North York so I was only able to land five of the devices.  They came as a package with five laserdiscs as part of a promotion that had gorgeous imagery and was a wonderful resource for science.  Now, at the time, televisions in the classroom was considered the ultimate luxury so we repurposed the Commodore 64 monitors that were declared surplus.

The truly nice thing about the technology was that it was indeed digital.  That meant crystal clear images.  The device came with a remote control about the size of a small power bar so that you could press and play or go directly to a spot on the laserdisc by typing in the digital address of the desired content.  And, quick frankly, that’s probably the biggest use that we had for them.  We bundled it all together as a kit that teachers could book for use in the classroom.  There was an initial uptake but then interest waned because there were only five laserdiscs to go with the kit!

As Mr. Anonymous noted, there was another more exciting use for the device.  You could connect it to a computer and control it with a third party piece of software.  Students could do their own research on a topic (as long as it related to the content on the laserdisc) and attach a button to their computer document and the laserdisc player would jump to a location and play with the output going to the monitor attached.  It was a great deal of work and effort and the need to get the connections correct but there was so much learning involved wrapped up in content, media, and construction of the computer environment.

There was some interest in doing so but, again, we were limited by content.  This faded when products like Hyperstudio came along and playback and media played right in the computer.  There was no need for an external device.  Once again, time and technology had moved on.  And yet, for those of us who stayed the course, there was so much valuable learning about the melding of various media, research, and students creating something generated only by an idea in their mind with a curiosity and desire to make something unique happened.

If you have an idea for a future post designed to stir up memories for me, please add it to the Padlet.

All of the posts in this “Whatever happened to …” series can be accessed here.

2 thoughts on “Whatever happened to …”