the lights on the QEW?

We learned early about our allegiance to the Queen.  Every Wolf Cub meeting started with this pledge and promise.  My remembrance of the exact words is slightly different but the meaning is the same.

I promise to do my best

To do my duty to God and the Queen;

To keep the law of the Wolf Cub pack,

And to do a good turn for somebody every day.

Regardless, we were taught all about the importance of the Queen to Canadians.  I’ve always been interested in the highway known as the “Queen Elizabeth Way“.  As any traveler will tell you, it’s the only way to get from just about anywhere in the province to Niagara Falls and then on to Fort Erie.  Map here.  The freeway was so unique when it was created; the first multi-lane freeway between cities in North America and it was lighted all the way.

But not just lighted.  With unique lights featuring the Queen’s ER, although at the time of construction, we had another Queen Elizabeth, the Queen Mother. 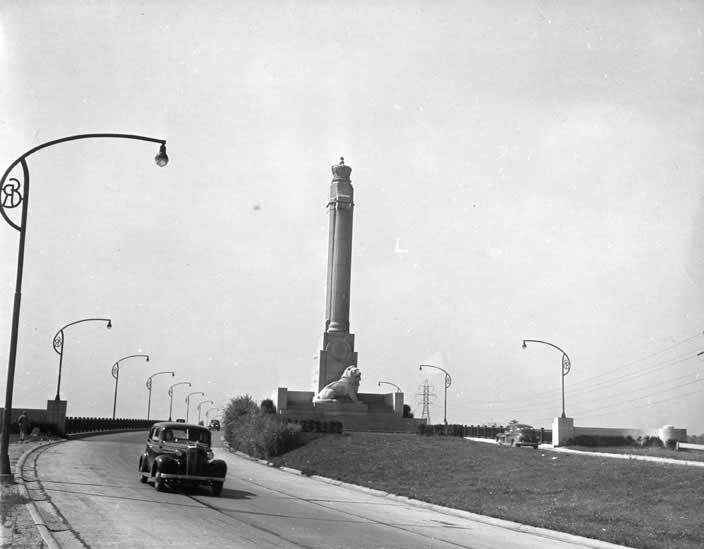 I seem to remember that the only time that all of the lights were on for the entire distance of the QEW was during the royal visit in 1939.  I can’t find a reference to this but I seem to recall reading that somewhere.  Can anyone help with that?

The other unique thing about the QEW is the signage.  Unlike the black and white standards that are used in every other provincial highway, the QEW still uses blue on gold for all of its signs.

In one direction, Niagara appears under the sign and in the other direction, it’s Toronto.  I guess the other major cities in the golden horseshoe are just fillers.

So, what brought all this back?

I had a very happy reason to be in Toronto last weekend.  I traveled up on Saturday; the usual route from here is the 401 to the 403 to the QEW.  It was busy but certainly not nerve-wracking.  Heading home was a different story.  Having lived a year in Toronto, I understand rush hour so we left mid-day hoping to squeeze in between the big rushes.  Things were going well until one of the overhead display boards mentioned that the QEW was down to one lane near the West Mall.  And, yep, we got caught in it and ended up parked near a bridge.  I probably should have paid better attention and remembered which bridge because it would make the rest of this story better.

As I sat there listening to the radio and looking about, I noticed that there were indeed some of those old fancy freeway lights – but only on the bridge itself.  The rest of the freeway had those huge modern star shaped lights.  (There probably were cameras on some of them to monitor the traffic)  I was tempted to take a picture of them but, of course, it’s against the law to use your device while driving.

I couldn’t help but notice the stark difference between the old and the new.  The new ones are undoubtedly brighter and have more functionality that the old lights.  However, it’s a sign of the times; getting traffic along safely is far more important that keeping the old lights operational.  It’s just too bad that the ER couldn’t have worked their way into the new design.  I hope that some of them make their way into museums rather than just being sold for scrap metal.

However, the reality is that the Queen will not be with us forever.  We all know of her hospital visit over Christmas.  As my wife and I sat in traffic talking about his, I was so glad that I had read this “‘London Bridge is down’: the secret plan for the days after the Queen’s death“.  I had a wealth of trivia at my recall.

One thing that’s not answered here is the future of the QEW afterwards.  But, at least for this trip, we enjoyed the beauty of the design of the original lights.  I know that for regular commuters, it’s just another highway.  For this infrequent driver, it’s an experience.  There’s something enjoyable about driving over the skyways (both of them) and the view of Lake Ontario you can see a lot of the way.

For a Sunday, how about sharing some of your thoughts.

If you have an idea, like Alfred, for a future post in this series, please drop it off at this Padlet.  I enjoy writing these posts; I hope you enjoy reading them.  They can all be accessed here.