Like most bloggers, in the beginning, I used to check my statistics here to see if anyone was actually reading the nonsense that goes into my posts.  I figured that the day I had zero readers would be the day to shut down and move on.  It never happened when I checked back then so you’re here reading it again.

For that I thank you.

Over the weekend, I had a particular need so ended up on an administrative page that showed the bar graph of hits to the blog.

For the most part, the bar charts revealed a pretty steady level of readership.  But two spikes caught my eye.

It sure looked like I hit it out of the park on January 24 and February 1.

I wonder what the posts were.

But, February first was a little bizarre.  I don’t take to rant too often but I did in this post “I refuse to join a club that would have me as a member“.  I guess that ranting has its attraction too.

It’s too bad that people weren’t commenting on the posts so that I could determine just what it was about those posts that caught the attention of the readers.  I think that commenting is a dying/dead art.  Oh well, I moved on.

One summer, I worked on a dairy farm and a favourite phrase of the lead hand was “Curiosity killed the cattlebeast”.  You have to know him to appreciate.

It was nagging me to I decided to look just a bit further.  WordPress has the ability to investigate where the visitors come from.

For the reference to Alice’s Mathematics YouTube channel, the results were very predictable.

Then, I looked at my rant. 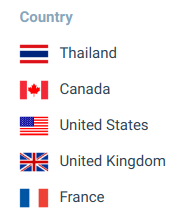 Not only was India not on the list, but it was topped by Thailand.  Looking even deeper, the number of hits from Thailand was at least triple the number from Canada and way more than the rest of the list.

Are there conclusions to be drawn?

You are free to draw your own conclusions.  I’m going to go with #1.

The reality is that the bulk of readers, according to the statistics, follow the blog via email subscription or in the WordPress reader so it’s tough to know the real origin of readers.  As you know, there are all kinds of other ways to follow a blog other than simply visiting it and reading.  That also speaks to the decline of commenting.

But in my fantasy world, I’m just going to go with the best of reasons.  It makes me feel good.

2 thoughts on “A bizarre day”