I’m a big fan of Google Maps and, in particular, Street View.  I guess that I might be a very visual type of person because, when I want to go somewhere, I’d like to know a bit more than an address.  I’d like to know what the place looks like too.  That way, I know exactly when I get to my destination.  It’s also handy to check out the neighbourhood and see where the parking is as well.

It’s also intriguing to check out some personal history.

We were having a conversation recently about living in Toronto while going to the Faculty of Education.  I yearned for a look at the house where I stayed.  I still remember the address; after all, I had mail sent there for a year.  Off to Google Maps I went and I entered the address and then I dropped to Street View.  What turned up surprised me.

It was a new house or maybe even a small apartment building.  I certainly didn’t recognize it so I spun Street View around to see if could remember any of the landmarks.  In fact, there were quite a number of new buildings on that street but I distinctly remember the house right next door so I was sure that I was looking in the right spot.  I’m guessing my hosts had sold their house to a developer.

That’s not uncommon.  Ah, too bad I couldn’t have just one more look at the old place.

Not so quickly, Doug.  You can.

Street View has a history of all of the images that were ever taken of a particular spot!  I rolled back the clock and, sure enough, there was the old house.  Great memories of living in the apartment over the garage were the result.

How to do this?

I checked out some places locally that I knew had had some reconstruction and rebuilding.  Sure enough, they had some of the older images.

Just for fun, I checked out the Municipal Building in the town of Lasalle which has had a beautiful facelift in the past few years.  I drive by it regularly so I didn’t even need to know the address.  I just zoomed in and then dropped into Street View and adjusted so that I was close enough.

There’s the rough-ish address that I was at when I looked at the picture.  You’ll see that the Street View image was taken in June 2014.  To the left, though, there’s an icon that I’d describe as a clock with arrows circling it.  Click that.  That’s where the magic lies.

Full screen, you have the current image and a little thumbnail of the image appears in the fly out window.  Check out the bottom of the window for a little scrubber bar.  I slid it back to 2009. 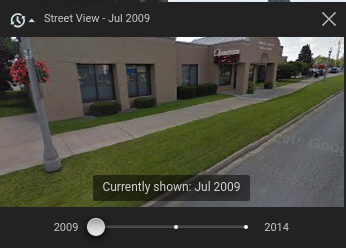 Now, the angle is a bit different or maybe the building was moved a bit in its reconstruction.  You can drag things around and relive what was.

It’s a fantastic way to relive at least some of the ancient history anyway.

How about in your classroom?

The sky’s the limit when you start thinking personal history.