Yesterday morning, I had just finished playing my online games with my friends and had noticed that there were some updates for apps on the iPad.  For those of you on this platform, you know that it’s quite common to get a rush of updates whenever Apple does something with its operating system.  In this case, iOS10 is the reason.  People have been downloading and updating but it’s always a good idea to wait and see if it goes well or if there’s a point release.  That was indeed the case – all kinds of articles like this one have been floating around.

Anyway, I took a look and there wasn’t any application that I use frequently enough or have a problem with so I wasn’t in a hurry to download.  As I always do, I took a look at the Featured applications and the release of Swift Playgrounds caught my eye.  I had been reading so much about this application and how it was going to be yet another game changer for education and those who wish to teaching coding.

Off I was to download it – only to find this: 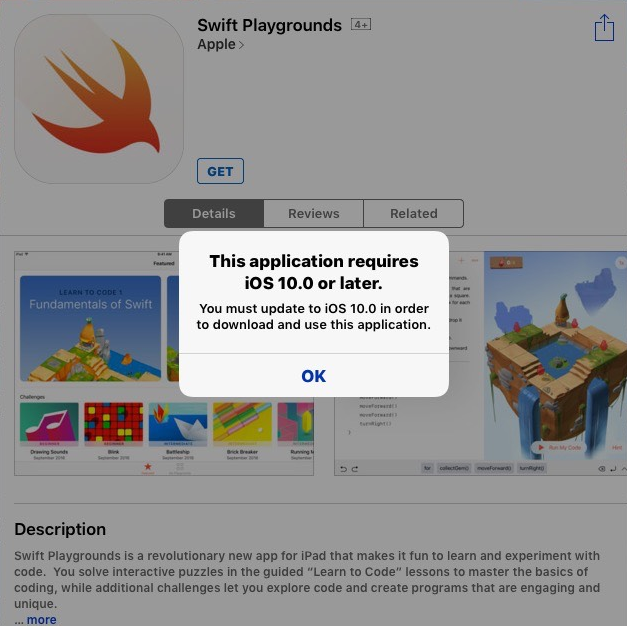 Fair enough, I guess.  I was a little hesitant since iOS has been getting progressively slower and crashier for me since roughly iOS7.

But, if you’re going to be in the game, you have to play by Apple’s rules.  So, I checked to see how long this was going to take to download.  Settings | Software Update and “Your software is up to date.”  with iOS 9.3.5.  Time to do a quick bit of research and …

Sigh.  My iPad2 isn’t eligible for the upgrade and it looks like it never will be.

This is the second iPad that I’ve owned.  I had an original iPad and it always felt like it was rushed to market.  This iPad2 was a real trouper.  Except for the slowness and crashing, it still works well when it works.  But all good things come to an end, I guess.

I’ve always been puzzled by the timing of the release of Apple things.  For example, in the case of Swift Playgrounds, it would have been nice to have had that all summer so that teachers who wanted to teach coding could a) become familiar with the application and b) ask their IT Departments to have it installed in cases where, by rules, teachers are not allowed to install their own applications.  I guess that a c) would now be important – update the operating system.

Apple was always seen as being so friendly to education – the timing makes me question that now.

So, $660 would allow me to upgrade my device buy a new device to test out this application.  Obviously, this won’t happen any time soon.  Like so many, I’m waiting with real interest to see how Android applications run on Chromebooks.  For half that price, you could have so much more.  In the meantime, there still remains the excellent applications Hopscotch and Scratch Jr.  For the many schools that have purchased their many iPad2s, that’s the only coding option.

But I will remain curious about this Swift Playgrounds.  I hope that someone kicks the tires and shares the experience with the rest of us.

One thought on “I’m not on the playground”