I got an email from a friend last night.

The daughter had found Crosscountry Canada online and you could play it.

I’m sure that, for the three of us, it brought back some memories from different perspectives.

For non-Canadians reading this post, this software was our equivalent of the Oregon Trail.  A comparison that might bring a smile and further enhance your memory can be found here. The software were basically an attempt to cross Zork with something that was historical/geographical/life skills/logical and get education to buy into it.  And, buy into it we did.

My first experience was installing it in a MS-DOS emulator running on Icon computers in my computer science classroom.  Now, I had other titles that were tied to my curriculum like Logo, Watcom Basic, Watcom Pascal, and a C programming language.  They were very appropriate for my classes.

But, computers were new and like they say in education – we share.  So, the computers in the back of my classroom were often used by teachers of other subjects.  In this case, the Grade 10 Geography class were discovering the glory of Canada via this software.  The trackballs were a-whizzing even though you had to interact with the program via the keyboard and that certainly wasn’t distractive to my class at all.

This was done in the days when the common thought was that these new fangled computers could do the teaching on their own.  We just had to give students access and get out of the way.  That seemed to be the way that they were used.  I’ve always wondered if the activity was considered a success.  It was only later when the software was used with students in the Junior years that I saw it used in a way that I could really appreciate.  It wasn’t one student with the computer; it was groups with a student journalling their experience, another doing offline research about the places that they were visiting, etc.  I’m sure that those students got more from the experience.

Sharing those computers for that purpose made for the longest week of my educational life, I think.  My patience was tested as I tried to find every computer science activity that didn’t require a computer that I could for my complete timetable. Six different classes. The worst part was that my students were all so curious to play the program themselves that the first couple of days when we got the computers back were a write-off as well.  But, they did learn the valuable life skill of sleeping periodically.

While the majority of the computers in the lab were the latest and could run programs in 256 colours, we did have one Icon 1 that only did four shades of amber.  The thrill wasn’t quite the same but the program still worked like a champ.

Anyway, for old time sakes, I did a search to see if I could find the resource that was being reference.  It turns out that there are all kinds of places to dig into Crosscountry Canada.  One can be found here.  It even offers the software as a download – does copyright expire?

I played it online for a bit. 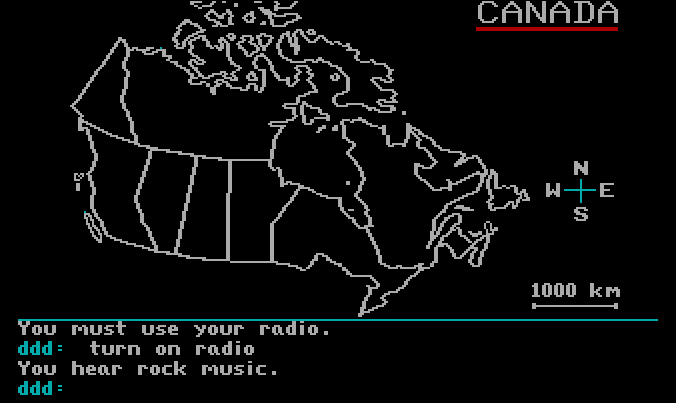 Visit the site if you’re interested in some nostalgia by playing it and to view some more screen captures.

For even more nostalgia, visit the Icon Computer link in the Wikipedia and scroll to the bottom to see some other noteworthy software of the time. I remember “Mind Your Own Business” as being quite practical and useful for my Grade 9 Business class.

Given the widespread results for Crosscountry Canada, I’ll bet you could find most of the other titles online if you are so inclined.

So many people got their start either as a student or a computer using educator with Crosscountry Canada so I guess that there really is some great nostalgia to be had.

In today’s classroom, everyone likes more realistic graphics and authentic experiences.  And yet, Crosscountry Canada could serve as a model for a learning activity for your hometown or your county.  You could combine Google Maps and Streetview to make your own scavenger hunt activity.  Or better yet, have students create their own and challenge their classmates to solve.

Just be careful of hitchhikers.

2 thoughts on “Beginnings for some”