One of the things that I’m proud of during my stint on the OSAPAC Committee was the provincial licensing of the HyperStudio product.  Once in classrooms, it truly was transformative.  I have to smile when I see all the hubbub of the current Maker Movement in schools.  When HyperStudio was used properly, kids were “making” using the best available at the time.  That includes the software, scanners, digital cameras, and music/sound recording.  As you’re about to find out, it’s been updated to support this current interest in “making”.

I can recall making story books, creating programs with the scripting language, public service announcements, presentations incorporating content from virtually anything on your computer, and more.  I still have fond memories of all the HyperStudio workshops that were offered to teaching staff, being invited to schools to have students show off what they had made from scratch, and even a presentation that I did with a colleague titled “The Answer to Every Question is HyperStudio“.  When HyperStudio stopped working with the latest operating systems, educators went searching for other classroom solutions.

Sadly, many reached for the low hanging fruit and many projects didn’t include the richness and scope that a comprehensive HyperStudio project offers.  While it’s important to know how to manage the internet and all that it affords, it’s also important to realize that you can actually create something with your computer.

Earlier this year, my path crossed with Roger Wagner, the genius behind the original HyperStudio.  I blogged about it here “A Great Reunion“.  While we’d met in person, I had no idea that he was following the work that my colleagues and I had been doing with HyperStudio over the years so it was a great chance to get caught up.  We’ve maintained contact through email where it was that I found about his latest project “HyperDuino“.

One of the current day technologies that has worked its way into tech classrooms is the Arduino.  A list of Arduino products is available for preview here.

Connected to your computer, the Arduino can be programmed to do many things in the physical world.  Consequently, it’s a favourite in the programming/coding and “maker” community.  The traditional Arduino is programmed with open sourced software that’s downloadable here.  Some tutorials about the software can be reached from the Learning Page.  If you’re a coder, you’re good to go.

That’s where Roger’s newest project HyperDuino comes in.  Check out this screen capture from the latest version of HyperStudio. 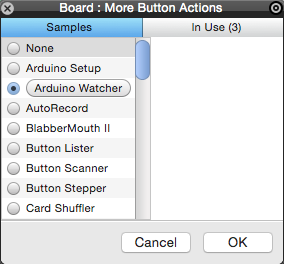 You’ll see that support for the Arduino is just another Button action.  Long time HyperStudio users will immediately recognize BlabberMouth.  You know how easy that was to work; the Arduino support is just as easy.  The heavy lifting is already done for you.  You’re ready to be creative.

Last week, Roger was kind enough to send me my own HyperDuino kit.  While I was waiting for Windows 10 to install on my PC, I was over at another area in the dougpete labs checking out the kit and doing my first experiment. 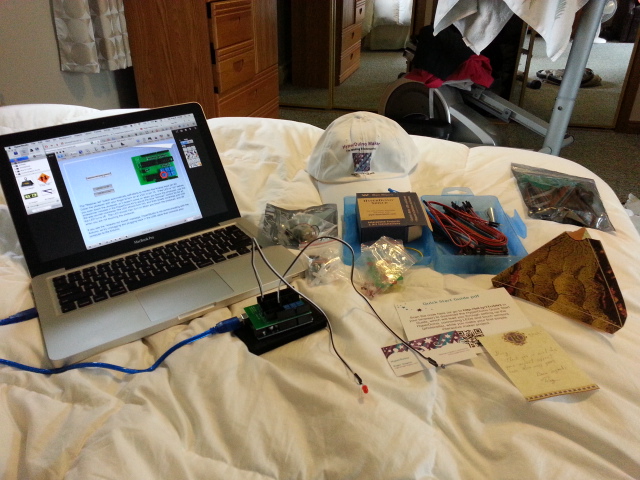 In another life, that nice white background would be the duvet that covers the bed but it makes for a nice background for a photo opportunity.  The kit comes with a Funduino board and the HyperDuino shield that you’ll see in front of my computer.  (posed for the photo…it was to the side as I was working with it.)  A more professional photo with the items labelled can be found on the HyperDuino website but it doesn’t include the personal note from Roger.

I was literally through the first experiment (controlling an LED with a photocell) in a matter of minutes.  The longest activity was actually carefully plugging the HyperDuino shield into the Funduino.  I live in fear of bending a pin. 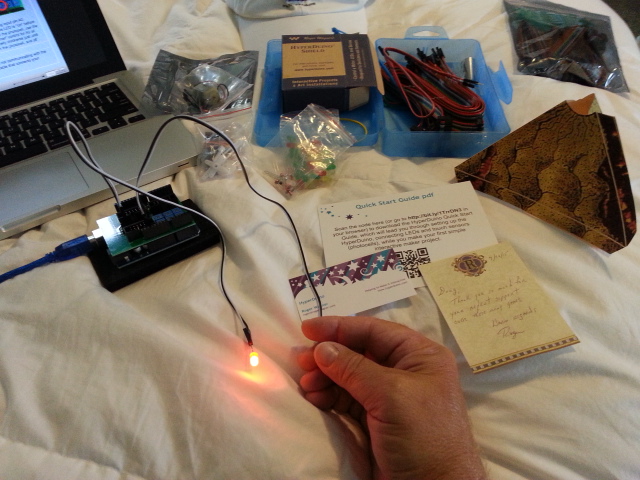 This promises to be fun.

I know that there are many schools and resource centres that are interested in creating maker/programming areas for students.  Of course, no activity should be done in isolation of the curriculum but it doesn’t take long looking through the documents to find the rationale for its use.

Purchase of the HyperDuino and replenishment items are available here.  The HyperStudio page on Facebook has been renamed to HyperStudio and HyperDuino Central.  Support and contact with other educators can be had there.

Watch a project in the making…