Last year, when Cyndie Jacobs and I agree to co-chair the Bring IT, Together Conference in Niagara Falls, we wanted to take advantage of everything that we could.  The Scotiabank Convention Centre is a beautiful facility and was very conducive for the type of learning that technology-using educators need.  In no small part, a large, formal exhibit hall let participants experience the latest in technologies that you were either currently using or could reasonably expect to use in the near future.

But we wanted more!

Niagara Falls is such an incredible place to visit and could there be a more social place in Canada?  To that end, we built in all kinds of social activities to the event.

It’s so good to know that this year’s committee is committed to bringing back the wonderful events that happen outside the traditional conference hours.  Look for:

The selfie is all the rage these days with young and old alike!  Join in the fun at the Bring It Together conference by getting to know our conference venue and each other with our selfie scavenger.  Capture yourself with a conference committee member, an exhibitor from the exhibit hall, of yourself learning something new in the Learning Space, a staff member from the Scotiabank Convention Centre and at least three of our six fantastic keynotes.  All you need is your best smile, your smartphone, and a Twitter/Instagram account to play.

To enter:
1.  Take a photo or video of one of the #SelfieScavenger suggested capture ideas.
2.  Tag it with both #SelfieScavenger #bit14 starting on Wednesday, November 5th, 2014.
3.  Share it on Twitter/Instagram.  Last entry by noon on Friday, November 7th, 2014.
4.  Follow the hashtag, like your favourites and encourage people to like yours.
5.  Win some really COOL prizes for participation, popularity, and originality!

#SelfieScavenger prizes?  Thursday and Friday … in the theatre and exhibit hall.

Complete details are available on the Social Events page on the website.  Look for restaurants offering meal discounts for #BIT14 conference attendees.

Oh, and don’t forget the learning.

And … make sure that you schedule a nap somewhere in there.

But the value added by Lorna Costantini…

…had me going back and reading my original post.

I can’t believe that I posted it over a month ago.  How time flies.  Now that candidate nominations are closed, we have a LOT of people running locally, including one running for mayor who wanted to withdraw but wasn’t allowed to!

It just takes a tour through our town (or any town in the province, for that matter) to see all of the signage up for display.  I remember my father telling me the difference in importance between a sign on someone’s lawn versus a sign placed on public property.  I’ve always wondered about the value of lawn signs, certainly I’ve never been persuaded by someone’s names.  These days, I now look for choice of font and sign design, balance, colour, …  (such a nerd)  I supposed that the biggest takeaway would be the sheer numbers of individual signs as either a straw poll for popularity or the amount of money that someone has committed to getting elected.  I will admit that I do appreciate someone who takes the time to make sure that the sign is level.

For probably the week after the election, the lawn signs will still be there, but they’ll eventually get taken down and hopefully recycled.  During the election campaign, there will be many candidates who turn to social and electronic media to reach out to folks.  My original post talked about the use of technology during election campaigns and I tried to argue the case that lawn signs have a limited life and could be recycled.  Social media presence has the ability to live on after the election.

I still stand by my comments; maybe I’m even more committed to them.  But, I think the post was way too early.  It’s just now that we’re seeing the influx of signs and social media presence.  To that end, I’d like to bring the post forward and ask that it not be applied to just trustees but to all that are running for election.  Just change “school” to whatever institution applies.

Jaimie and I were out for our morning walk and we saw a red and white election campaign sign on a neighbour’s lawn.  We thought – hmmm, a politician who wants to align themselves with the Liberal Party.  As we got closer, it turned out to be a sign for a candidate for the local Catholic School Board.

For my non-Ontario readers, a quick briefing.

In Ontario, we have three major political parties:

and a collection of other parties.

In addition, each municipality has a mayor, perhaps a deputy mayor, and councillors that are elected every four years.  School board trustees are elected at the same time.  Social media made for some interesting moments at a previous election when people started to take pictures and send a copy of their ballot out on Twitter.

It’s interesting how social media permeates so many of the things in our society.  During the last municipal elections around here, the buzzwords were “transparency” and “openness”.  Even though our community retains the fame (and signs) of being the Safest Community in Canada, there have been issues that have arisen that I’m sure will result in a higher than normal turnout of voters.  So, it seems to me that it’s more important than even for candidates for the school boards to be very visible.

During the last municipal elections, many turned to social media.  I thought, at the time, this was a great idea.  It’s free – but a blog, or Facebook presence, or Twitter presence would raise the visibility of candidates.  I actually started a list of candidates on Twitter and followed the discussion about the election and their thoughts on education.

Then, the election was over.  Down came the lawn signs and the efforts to talk about issues on social media.  To be fair, there are still three local trustees that maintain a presence and do interact on social media.  But, from my perspective, that’s about it.

I wish I could properly attribute this quote but it’s stuck with me.  “The Primary Goal of any Politician, once elected, is to get Re-elected”.

As we walked by the lawn sign, we mused that it will be up for a couple of months and then taken down.  Similarly, how many social media accounts will do the same?

When you think of the things that could be done…

In fact, here are a bunch of reasons why you should tweet.

Doesn’t it make sense to develop an educational digital footprint, care and feed it during the campaign, and then continue after the election?  Your constituency won’t learn about you from a random lawn sign; through social media, they’ll know your record, your successes, your passions, your dedication….

It’s no secret that I love exploring with maps.  I think it can be the ultimate infographic!

If you spend a lot of time exploring a map, there are so many great stories behind it.

Navigate the map by mousing over a cable and the name and details of the cable appear at the bottom of your display.  On the right, click on the name of the specific connection for details and further links.  There is a caution that the details may not be completely accurate in location.  That’s completely understandable.

If you want to take the politics out of things, switch from the basic map to a satellite representation. 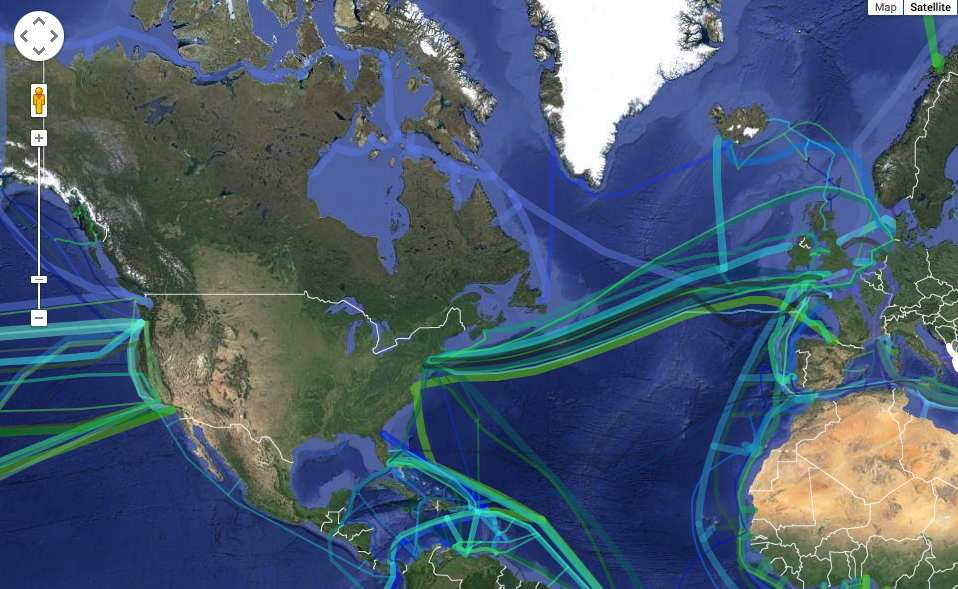 I’ll bet that you’ll find yourself being a connected global navigator in no time at all.  Of course, it makes for wonderful classroom discussion!