It’s too cold to go outside these past couple of days so people are taking time to blog!  We’re beneficiaries of their thoughts and opinions!

There is a space…

Sheila Stewart is pondering about his quote:

Going back in my mind to university days and psychology courses, I’m not sure that the statement could be taken literally.  But I think that there’s a great deal to think about – particularly in this digital age.  I smiled and thought of my recent post “You have about five seconds…”  In the digital world, I do find myself making decisions quicker – at one point, they might have been tempered by a long walk, but not necessarily now.  Maybe I should up that to six seconds.

Colleen Rose, a frequent blogger on her own Northern Art Teacher blog had an increased presence on Facebook recently.  She’s painting at the Thunder Bay Health Science’s Centre, collecting donations as she goes along, and her painting will be auctioned off at the end – all in the name of fundraising.  Awesome.

How To Create QR Codes To Use In Your Classroom

A few years ago, at EdCampQuinte, I led a session where we discussed the use of QR Codes.  The concept was very new at the time but there were a number of reasons, we decided, that made it worth the time and effort.  Now, they’re everywhere – enter a contest by scanning a code here, see the complete details of a new car by scanning there…  it takes away the necessity of waiting to get online and typing in a URL.  Just scan it and go.

In Belleville, we all agreed that the most painful thing in the world is to watch a primary or junior student type an address on the keyboard and get it right, the first time, and without mistake.  It’s even worse on iOS for young fingers since you have to go to special characters to just get the “/” key.  (not so on Android…)

So, speed and accuracy, are two great reasons.  And the fact that you can place QR Code anywhere makes for instant access as long as you have a QR Code reader.

Kristen Wideen explains how she creates and uses QR Codes in her classroom. 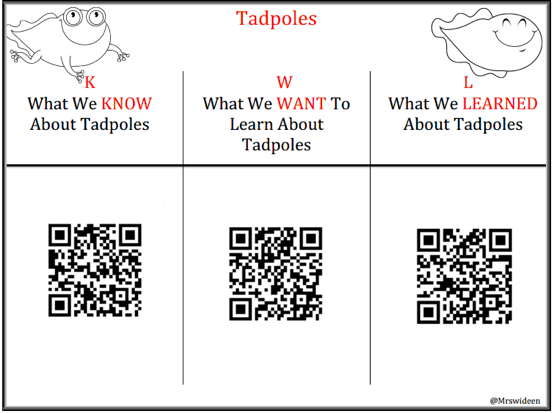 This post is definitely worth a read and share with colleagues interested in codes.  Now, there are so many utilities to help you create QR Codes.  There’s no excuse for not doing it.  Rather than a website, I have an extension in my browser – QRUTILS.com to do the trick for me.  Before and after EdCampQuinte, I had created a Scoop.it resource where I’ve tucked away things that I’ve found helpful.  I’ve added Kristen’s blog post to the resources.

I can remember when principals where members of Teachers federations and there was no question that they were true teachers in the profession.  I was so fortunate, having had three principals at my school and then a couple of supervising principals later on, to have worked with some of the best educators that I know.  Either that or they left me alone to avoid talking about computers.

But, I have seen principals take on different personas when they sit in the chair in the big office.  Some take the budget and spend to get the best resources into the school; some become the ultimate manager of the building; some become single-focused with EQAO within the building; some balance priorities; well, you get the point.  That they’re so diverse should be expected – after all they’re human too.

There were some interesting blog posts surrounding principals this week.

Andrew Campbell takes on the diversity of skills and approaches among principals and questions the professional decision making that teachers are allowed to make.

Can’t We All Just “Get Along?”
Does “Getting Along” Mean That We Have To Agree?

Aviva Dunsiger jumped into the conversation with a couple of her own posts, including a comment from her vice-principal.  She seems to think that there might be some sort of middle ground where everyone “gets along”.

All three blog posts are interesting to read and think about.  I would suggest that anyone who will be taking on a position of added responsibility read and think – what kind of administrator do I want to be, keeping in mind the old adage about pleasing all the people some of the time…and really put a focus on what it’s going to take for true student achievement.

And then, there’s principals learning…

Paul McGuire is digging in to how the SAMR model could apply to administrators.

Before moving to any particular tool, Work makes a great point – time is a precious commodity for any school staff and we need to really examine if there are other ways to convey information beyond the traditional (yawn) staff meeting.

Kelly Power is spending her energies becoming “Googley”, but in an administrative kind of way…

That’s a lot of Google.

I hope that you get a chance to read all of the above.  Some great resources and thinking from Ontario Educators.  You can check out my entire list here and please, please, if you’ve started your own blog, take a couple of minutes and complete the form so that your blog can be added to the list.

2 thoughts on “This Week in Ontario Edublogs”