One of my favourite university courses was my first full course in statistics.  I still remember the first day when our professor indicated that there were two ways that she could teach the course.  One was through number crunching and the other was through story telling.  She indicated that her approach would be story telling and that there was another section of the same course offering the other approach if anyone wanted to change.

I didn’t change – I’d been through the whole registrar process a previous time and didn’t want to go through THAT again.  I decided to stick it out and I’m glad that I did.

Her message and it’s stuck in my mind all these years is that you’ll be more effective in communicating the statistical results of anything if you can present it in a story.  It made sense at the time and it makes even more sense as we get bombarded with statistics and numbers on a daily basis.

In education, I’ve sat through so many presentations about research results.  So many of the presenters probably took the “other course”.  Persuasive discussions are shown via Excel spreadsheet which you’re supposed to get onside with because Excel is “the industry standard”.  To help you understand the results, watch the presenter show how she/he highlights rows and columns and cells to make the point!  You might even be lucky enough to get your own printed copy with the highlighting already done!

On the other side, I once worked for a superintendent who turned out the most engaging presentations.  Every one was a story!  While I’m unable to remember a single presentation from the first method, I can still remember some from the second.  One, in particular, was on the district’s love with paper, printers, and photocopiers.  Grounded in statistics, you would sincerely have to dig to find them, (they were there…); the message was embedded in the story which was filled with imagery – trees, recycling bins, home fridges, …  It was so powerful and memorable.

One of the reasons why I’m a fan of the infographic is that they tend to take that approach.  Of course, at the heart, you’ll find statistics but the presentation of a good infographic tells a story and takes you along for the ride.

You may have noticed some Twitter messages recently from Vizify.  Hopefully, you’ve been notified or tagged in one because statistically you showed up significantly in someone’s timeline.  My most recent tagging was from Teresa Marrello.

After receiving a few of these, I decided to check it out myself.  If you want to jump to the end of the story, my video is stored here.

It was with a little hesitancy that I proceeded because Vizify wanted me to grant access to my Twitter account.  But, I realized that I could revoke the access afterwards so I went forward.  It was only a few seconds later and my movie of 40 seconds was created.  I watched it to see where my major interactions were from the past year.

A lot of it made sense.  I’m an early riser and am most active personally first thing in the morning over breakfast and the morning news reads.  The rest of the day is random, scripts, and could be at any time.  It would be interesting to see how much was actually done on weekends when my days aren’t exactly scripted!

After the movie, I wondered “Is that it”?  My whole year summarized in 40 seconds.

Fortunately, Vizify lets you do what a statistician would call “drill down”.

So, is there more than just my top three topics?

Definitely, but I am happy that I am seen to be promoting the wonderful efforts of Ontario Educators.  How about my “Golden Followers”?  Top three and that’s it?  Poor Brandon – he tries so hard.

The site does allow you to dig a little deeper.  I didn’t realize how much “coffee talk with Linda” had transpired!

In fact, Vizify does allow for a little editing of their results or you could even add another scene to your story. 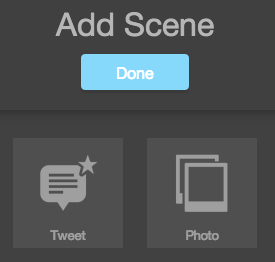 Now, that’s what I call a great storytelling approach.  Now, certainly, I could access the entirety of my Twitter history if I wanted and then build my own story using my software tools.  Vizify does a nice job of taking on some of what most people would call their highlights.  If you’re interested in this statistical approach to analysing yourself, do it at their website.  If you have a classroom Twitter account, I’ll bet your students would get a kick out of the results.

When you’re done, you should probably consider revoking access to your Twitter account until the next time you want to run the routine.  It’s just security common sense.  While you’re there, you should probably take a look at all of the applications that you’ve allowed access to your account.  If there’s no clear reason why they should, here’s the chance to turn it off.