I know that it comes with a warning but I was caught up with interest in the nightly build of Firefox with the Australis look to it.  I’ve been a fan of the theme for a while but when the author indicates that it will be retired because of the current changes with Firefox, that’s got to be worth a download!

The current look for Firefox has been around for a while.  The signature orange Firefox menu and the rectangular tabs.

For me, it’s a matter of looks (notice the green theme – Puny Weakling) and I like to pin tabs that I use all the time.  Notice Hootsuite, Facebook, Gmail, Google Plus, and WordPress.  It gives a compressed view and probably saves a few pixels for use on the screen.

I also like to reduce the need to scroll and so will turn off menu bars and status bars whenever possible.  If I’m really going distraction free, I’ll display things full screen and get rid of everything except for the content.

The same thing with Internet Explorer looks like this…  Pinned tabs means something different to Internet Explorer  so the layout is considerably different.  WordPress is good enough to scale the image so that it views nicely on your screen.  Mental note – I should have exited Firefox before doing the screen capture so that you can’t see it through the transparent title bar!

Or, with Google Chrome.  (I know … again with the green)

So, I was curious about the Nightly build of Firefox and installed it to take a look.

Immediately, I was drawn to it.  Like any release of Firefox, it checks to make sure that my addons are OK and the loads.

The look definitely is rounded and curvier.  I scanned the look just to see what was different and noticed that there was only a “back” button available.  That was pretty strange.  I did some noodle scratching and figured that probably the folks at Mozilla figured that nobody used it anyway and so dropped it.  I reconciled myself by saying that this wasn’t a world ender. 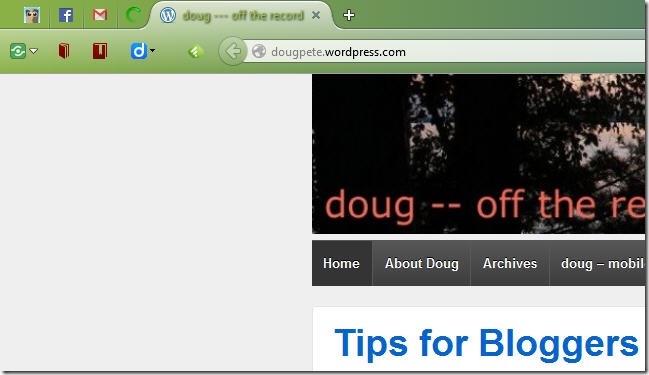 Then it occurred to me.  I had nothing to go “Forward” to!  Sure enough, I went to another website and then back.  Intuitively, the browser gave me that option.

I really like it when software is smarter than me.

The lack of the orange Firefox bar was the next thing of interest.  While I don’t use it all the time, there are times when I might want to turn on a menu bar or open a new private window for browsing.  On the right side, a new icon beckoned my attention, and it’s in fact the options that I have become accustomed to.  Whew!  I don’t have to learn even more keyboard shortcuts! 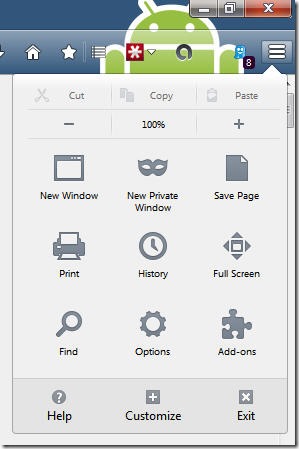 Now, I know that it’s a nightly build and there are nightly updates to keep the browser current.  It may be that there will come a time that I tire of downloading the new code from over night but for the time being, I’m enjoying the new user interface experience.

Beyond the experience, it’s interesting to see just what’s happening under the hood.  I guess the curious coder in me is just fascinated in watching what the developers are talking about.

In the long run, the web will win as a result.  Firefox will get better and you can bet that the other web developers are keeping an eye, maybe even contributing to the development, so that we all have a better experience and safer web to visit.