I was fortunate enough to have six sections of Computer Science / Data Processing and they were all scheduled into the same room.  I remember my first impressions when I walked in the room.  The room was wide and not deep as opposed to many classrooms that are narrow and deep.  I liked that concept already.  And, we had tables – not desks – so that we could move around and set up groups easily.  I really liked that!

Around the room, there were six bulletin boards.  Starting from week 2, we were able to use those as part of our class.  There was no way that I was going to put posters up like I’d seen in so many other classrooms.  They tend to fade with age, get curled, dated, and lose their interest value quickly.  No.  These were going to be student spaces.  When classes started, each class was divided up into groups of 2 or 3 and their job was to change the bulletin board on schedule.  The actual schedule was that they had to take down the previous bulletin board on Monday and put theirs up so that it was ready for Tuesday.  Once up, we all got to enjoy the bulletin board and the entire class had a change to evaluate and the effort contributed towards their ultimate mark.

I should also point out that I was geographically very lucky.  Our room was right across the hall from the marketing room where they had die cuts, bristol board and fancy paper/backgrounds to no end.  In my first year, I got away with beg, borrowing, and stealing – starting year two some of the supplies came from the computer science budget.  Much of the materials was standard school stuff and so the students also used their own creative means to add to the supply.

I did get the obligatory complaints – Sir, this is supposed to be Computer Science, not Art.  That did open a great conversation about not all jobs in the computer industry being about programming – user interface – design – colour use – and so much more.  For the student who didn’t have the highest grades, it was a way to do well in another area.  For all of them, it was an opportunity to do some research – they had to spend a period in the library planning this – and then design a way to display the results with flair. 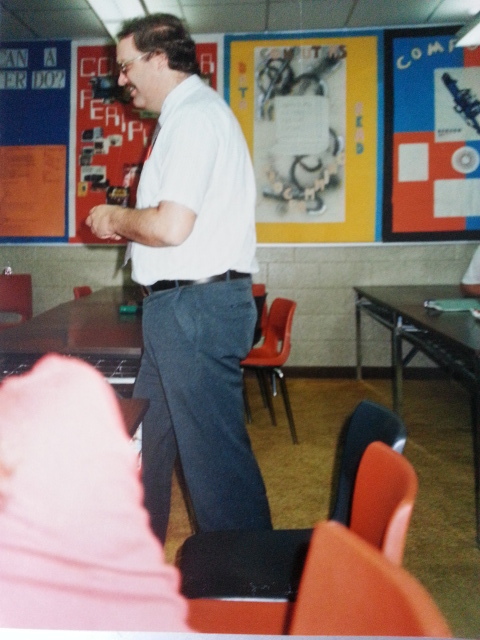 Me, around the turn of the century

Sadly, this is the only picture that shows the bulletin boards without students and no release forms signed.  Ignore the ugly guy and take a look at the background.

Today, in many ways, the modern bulletin board is the infographic.  You can’t really tell from the picture but we had things on display like “History of Storage Devices”, “Women in Computers”, “Development of Programming Languages”, “Computers in Society”, “Computers in Medicine”, and so much more.  I wish that I had taken pictures of them for a permanent record.  As you can imagine, some were good – really good, and some were a task that had to be done for the class.

Maybe this partially explains my fascination with Infographics.  Properly crafted, they tell a story, show evidence of research, have design components, convince and educate the audience.  I know that many people embrace the concept of infographics in the classroom.

Do they have their roots in the humble bulletin board?