I really enjoying reading news online.  A lot of times, you’ll get to a website though where there is a great deal of distracting spinning things and advertising that really take away from what you’re focusing on.  I really like how Zite opens the content in a reader and I’ve used the Readability plugin for a long time to do the same sort of thing.  Just give me the content to read.  Readability calls it reading comfortably and that’s a great description of the end result.  But, I’ve now installed a new plugin that does that and more.  Substantially more for my purposes.

Giving credit where it is due, it was @reed_man who brought this first to my attention the other night. The plugin does just what Readability does with a sweet little feature.

It’s Clearly from the folks at Evernote.  It installs itself as a little button in your browser.  When you come across a blog entry or a newspaper article, click the icon and you’re reading clearly. 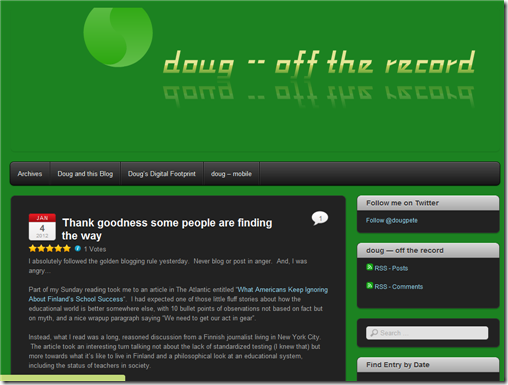 Gone is the extraneous and what’s left is the content.  Don’t like the newspaper format?  Clearly has a number of different styles including one customizable to your liking.

But, that’s just eye candy.  The really exciting thing becomes available when you click the elephant! 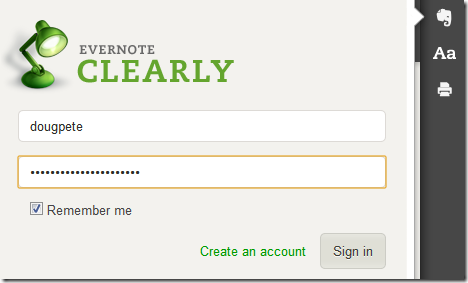 Absolutely!  The Clearly app will take the article, web clip it and send it online to your Evernote account.  So, compile all this functionality together makes it a real winner for me!

But, it gets even better.  Remember my post a while back about needing multiple browsers because some websites don’t play nice with the browser that I have open?  I ran into a situation just today reading an article in the Windsor Star.  Once again, the text didn’t render around the image properly in the Chrome Browser.  Now, instead of going to a different browser to solve the problem, I just open it in Clearly.  Voila!

I absolutely followed the golden blogging rule yesterday.  Never blog or post in anger.  And, I was angry…

Part of my Sunday reading took me to an article in The Atlantic entitled “What Americans Keep Ignoring About Finland’s School Success“.  I had expected one of those little fluff stories about how the educational world is better somewhere else, with 10 bullet points of observations not based on fact but on myth, and a nice wrapup paragraph saying “We need to get our act in gear”.

Instead, what I read was a long, reasoned discussion from a Finnish journalist living in New York City.  The article took an interesting turn talking not about the lack of standardized testing (I knew that) but more towards what it’s like to live in Finland and a philosophical look at an educational system, including the status of teachers in society.

The article does dig into what a social society can be with respect to healthcare, meals, and equity of access to education for students.  It’s a really interesting read and the article paints the picture of success that has been enjoyed there.  There are definitely lessons to be learned from the article.  As I was reading it, I tried to imagine how something would be possible in Canada and the United States.  Two countries definitely looking for ways to improve student achievement but at the same time so much bigger in population, diversity, and just plain physical size.  To that end, I think it was an excellent article because it made me sit back and wonder …

When I reached the bottom of the article, I noticed that they use Disqus to manage their replies.  Disqus doesn’t work with the security settings that I have in Google Chrome, but I was interested in reading some of the over 900 replies.  (at the time, now the total is over 1100).  So, I opened Opera and loaded the article there and Disqus worked fine.

I really wish that I hadn’t.

What I read was absolutely disgusting.  While there were a few points that were of interest (like is Finland a Scandinavian country), the comments quickly reached the bottom of the barrel and started digging.  As I read the racist and other outright stupid comments, I couldn’t believe what I was reading.  I stopped and stepped back from the article for a bit and thought about the politicians.  If this is the voice of their constituencies and they’re developing policy based upon the needs to get votes and get re-elected, it’s no wonder that reasoned change isn’t happening.  These were from the replies that made it to public view.  There were comments throughout the replies that had been censored.  Based on what was deemed to be okay for the public to read, I can only imagine what they had written.

I started this blog entry and revised it many times before I decided to sleep a day before editing it another time and posting.  I just couldn’t get over what I was reading.

Then, my mind reverted to the great people I’ve referred to recently.  They’re the people that have found the way and are reaching every child in their classroom regardless of who they are.  Thank goodness, they have their goals of success for all students and the desire to step into their rooms on a daily basis, put on the smile, and try to engage and motivate their charges to do their best.  These people are heros for doing what they do on a regular basis despite this other element.  If you’re reading this and you’re one of them, you have my neverending admiration.