I had every intent of visiting every display in the exhibit area that I missed yesterday.  I admit it; I failed.  My problem lies in the fact that I want to talk to everyone who has poured their energies into supporting student work on their projects.  But, a quick look at the floor map made me realize how fruitless that was going to be in the two hours that I could devote to the floor.  Now, I could do a speed walk through but that just wouldn’t do justice to any of the displays.  So, I decided to continue with my theme of going to booths where there were just a few people so that I could get some personalized attention. 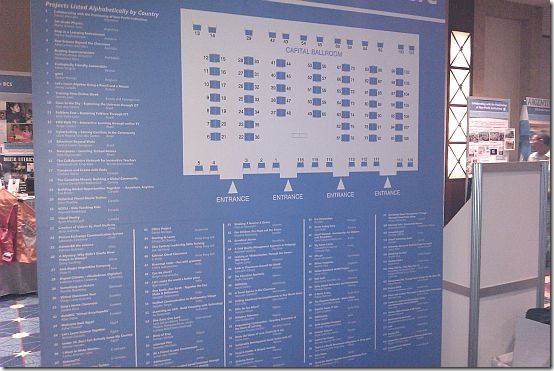 So, I did look at the exhibit throwing and catching fish at the Fish Market but elected not to stand in line.  But, it was amazing what could be done with a Kinect system!

I did, though, get a lesson in making paper birds as part of a unit dealing with the migration of birds.  I have a new found skill – I can do it!  But, the documentation proof is tough when you’re the guy holding the camera.  We did have a nice conversation, without an interpreter, of the migration patterns in Taiwan.  I was able to give back a bit and talk about the Monarch butterfly migration through Essex County.  For both the exhibitor and for me, it was an opportunity to show off our parts of the world via Google Maps.  Fortunately, I remembered where the instructions were as the computer was not set to the English language.  It was such a delightful experience. 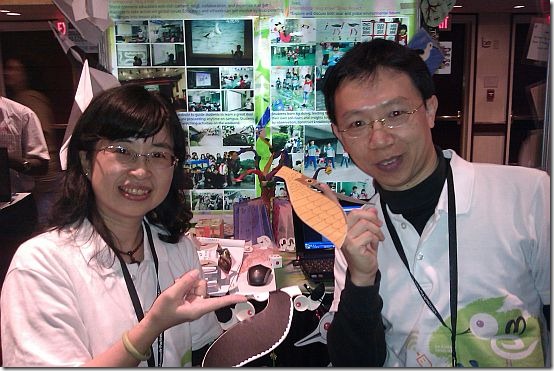 My next stop was for a prolonged conversation with an Indian Business/Entrepreneurial Studies teacher.  Over the course of three months, her students using some solid Problem Based Learning as they researched, developed, and then put into place a marketing and business plan for the management and promotion of their products.  If anyone is looking for a great idea, one of the students had proposed a computer carrying cases that actually charged your laptop while you rolled it, picking up on the energy from the cart as you go!

The project featured developing marketing campaigns using Web 2.0 technologies as well as traditional desktop applications.  Everything was driven by a blog where students would work on timelines and deliverables.  It was a massive project.  I still can’t believe the quality of work that was made possible in such a timeframe.

Digital citizenship, bullying, online identity were the order of the day for this Columbian project.  My timing was bad for the poor exhibitor but I loved it!  Her translator had gone for lunch and there was fear in her eyes as I asked about the project.  She was very nervous to go it along but did a wonderful job.  We talked about the problems that were the impetus behind this project.  Do they seem familiar?  It’s somehow comforting to see that educators all over the world are dealing with these issues.  In this case, every bit of social media was explored.  My host was totally surprised when I indicated that many school districts block Facebook and Tumblr which were two of the tools at the heart of this project. 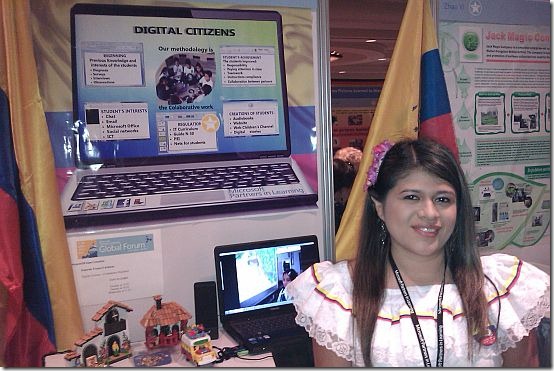 These were primary level students and one of their methods for delivering the message was through the creation of Audiobooks.  The auditory part, of course, left me behind but the visuals from the personally crafted drawings was perfectly clear.  The students understood the problem and were using this media to address it.  The class had their projects published on Facebook where parents as well as students were invited into the closed group to enjoy and discuss the student work.

The powerful theme throughout the sessions that I attended was about changing the world – or at least one small part of it.  At a British display, www.askthemusicteacher.co.uk, a secondary school music class talked about their use of technology to create original music.  In the movie studio, the students used a Kinect system to explore new avenues for creating and pushing their understanding of music. 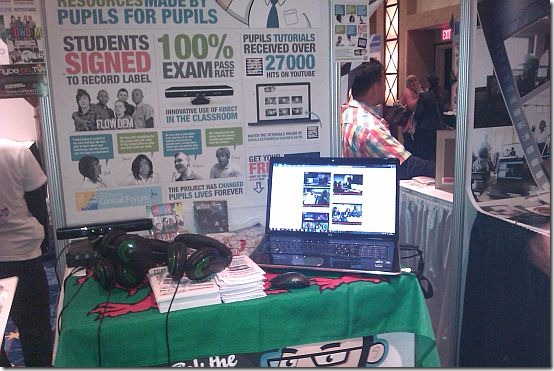 Rather uniquely, the backdrop was actually an infographic to convey the message from the booth.  Visitors got to wear headsets to listen to the original creations.  And, cooly enough, a group formed a band, were signed to a recording label (we got complimentary copies of the CD!) and these lads are off and flying.

It was an amazing day.  While I was there at lunch, some of the exhibitors were out.  I missed the Canadian contingent but did grab a couple of flyers.  Mr. MacDougall’s Campbellton Middle School in New Brunswick explored Visual Poetry for perspectives on global events.  And, J.D. Touchie’s class from the same school focused their attentions on creating Historical Novel Movie Trailers.  Both were such great ideas and I’m sad that I missed demonstrations.  There was also a very significant project from an Egyptian display.  It’s the creation of a wiki entitled “Welcome Back, Egypt“.  Devote some time to it and just picture how students can help change the world.

And, yes, the hashtag #PILGF was global again.  Thanks to SocialBro, I was able to snag this picture of who in the world was contributing. 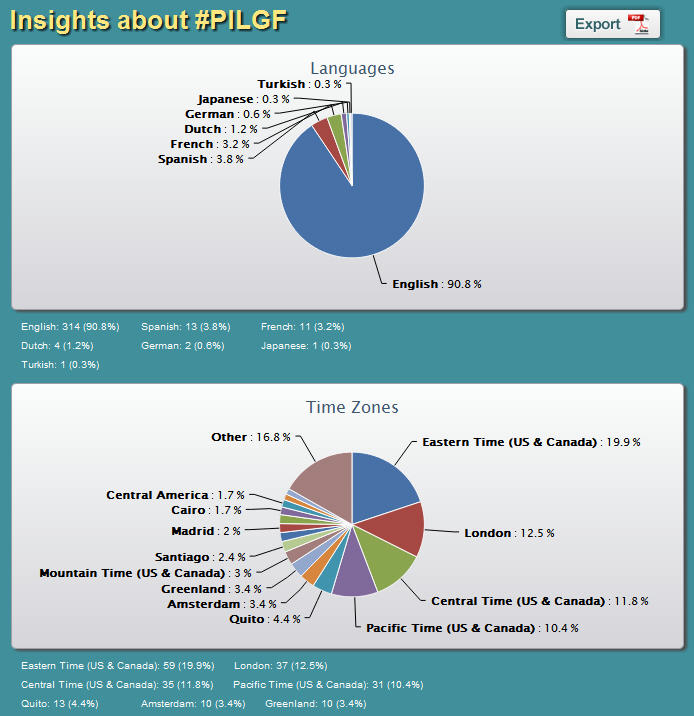 The time to view exhibits was cut short as we were up for 1:1 interviews with Lauren Woodman and Anthony Salcito.  And, of course, there was the very motivating morning keynote about Big History from Dr. David Christian.  There’s more to come about all of this when I get home.

Tomorrow night, though, is the big gala with the awards given now that the judging is complete.  It’s going to be great!