It started as just a silly little comment on Google Plus.  The suggestion was that we should meet to face to face to see if we could learn from each other and flat line parts of the learning curve.  That wasn’t really practical but @pmcash suggested that he would host an Adobe Connect session and those that were available could join in the learning.  When I was all done, there were four of us with five devices comprising Macintosh, Windows, and iPad computers exploring and sharing our findings.  Joining the session was @pbeens and @aforgrave.  It turned out to be a great couple of hours learning and sharing online.  In fact, I had to leave first so I don’t know how long they continued….  It was great to join the lads again from the east and mid-Ontario.

I just think that Andy should have brought enough for everyone. 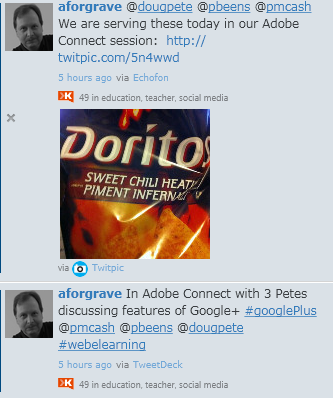 We actually started in Adobe Connect where the latest update had been applied and we just worked our way through some of the features.  As we noted, it seemed quick and more responsive, particularly to those of us with slow network connections.  As such, it was great for screen sharing as we dug into some of the elements fairly deeply.

Of course, we started by sharing our thoughts about Circles.  This seems to be a great discussion point whenever you talk to anyone about Google Plus.  For such a simple concept, we all have our own take on how best to use them.

Probably the most important exploration for me was about privacy.  Just what information was being shared with the rest of the world.  With good friends, you don’t mind if there’s an info slip because you might well know the information to begin with.  As it turns out, security settings seemed to protect information as one would expect.  That was great to see.

Then, we turned our attention to +1s.  Is it a thumbs up?  Is it a like?  Is it a bookmark?  Are all things that are +1ed available?  Can you see all of the webpages that you’ve marked with a +1?  Can others?  After all, on your profile, there is a tab labelled +1.  As it turns out,  the default is not to share your +1s.  But, you can if you want.  While we suspected that it might be somehow embedded with the gear menu, it turns out to be much simpler than that.  Just go in and edit your profile.  Right there, you can turn it on or off.

We then got into a really good discussion about whether publically sharing this was wise or not and when and how you might.  My takeaway was to leave it off but I can’t speak for the others.  We also wanted to know how to add a +1 to one’s blog.  Of course, if you’re running a hosted blog, you are a little handcuffed.  But, @aforgrave hosts his own and quickly downloaded and installed one on his own.  That’s fine for him but how do you handle it when you’re on someone else’s and they don’t have the setting?  Off to the Chrome Web Store where we found a number of extensions that do the deed for you.  Quite frankly, this isn’t something that I do often.  If I want to recommend a site, I sent it to my Diigo account so that it is available there and then is posted to this blog in my OTR links.  Maybe it’s something that I should think about.

Next, we played around with the concept of muting.  I don’t know if it’s the novelty of the new platform or that it just encourages people to talk more but I do find that there is a great deal of activity and my account is just a week old.  Muting or silencing runaway conversations looks like a good feature but we all agreed that we would like selective muting.  Perhaps collapse the replies as an option in addition to the complete silence rule.

@pbeens then created a hangout for us where we decided to, well, hang out.  It took a little bit of magic to get everyone up and running, it seemed but we were able to do it and did some experimenting with the setting.  The thumbnail of the participants is pretty impressive but even more impressive is how the video shifts to the current speaker.  After a little clicking and green frame hunting, we found a way to override that.  The chat window on the left is very handy to use to avoid people talking over each other.  Unlike Adobe Connect, there is no host and common courtesy would be needed for a successful hanging out.  There were a few things that would be nice to have added to this – one would be to record a session and the other would be to do some screen sharing or facility to have a presentation running   Perhaps that will come.

The YouTube sharing seemed like a great deal and we thought it might work a little better than what it did.  We think that it should allow individuals to share their efforts.  But, for our trying and trying, we seemed to get stuck on the first video that we experience.  So, Andy and I had one video and the two Peters had their own video.  That was a little frustrating and we couldn’t get to the bottom of that one.

Amidst all this learning, it was also great just getting caught up with friends.  It’s been months since I saw the Peters and I even learned a little more coming out than I did going in.

So, we went into the learning with no set agenda, just a bunch of learners wanting to learn and discover.  It was time well spent and I know that I went deeper into these topics than I would have on my own.  I’m a little bit smarter leaving and that’s about the best testament to learning that one can have.  We’re already bantering around topics for our next learning session.  If you’re interested, keep your eyes open on Google Plus and we’d love to have you join us.