Happy #FollowFriday, Ontario Educators.  Hope that it’s a good one for you.

Have you ever wondered how far and wide our participants are?  I have too.  One of the things that you can do when you register your Twitter account is give the name of a community.  If you’re openly transparent, you can give your complete address or Geo-Locate yourself with your Smart Phone.  Or, you could play it safe and just give a general location or none at all.

As you know, I’m big about visualization and am constantly looking at ways to create them.

I always wondered if I could plot our little group on a Google Map given the information that’s provided freely in Twitter profiles.  The current list totals 314 of us.  Even I wouldn’t go through the list one by one and plot on a map.  I’ve always wanted to find some way to automate the process and I managed to put the puzzle together this week.  Here we are in the province. 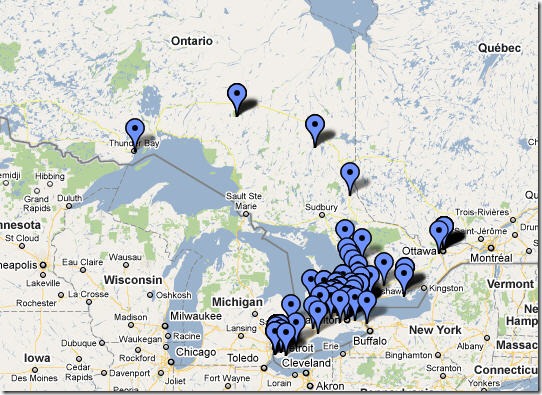 I needed a way to get at the data and it turns out that a service that I subscribe to does a wonderful job of it.  The service is called Export.ly.  It’s designed to let you access accounts or lists to pull the information.  So, I gave it the address to the Ontario Educators list at http://twitter.com/dougpete/ontario-educators/ and Export.ly does its thing.  One of the export options is to export in CSV format and it’s now sitting on my hard drive.  Cool.  If you ever have to work with data, you know that there often is some cleaning up to do.  In this case, there was a bit but Libre Office did a wonderful job of it.

First of all, not everyone had provided an easily accessible location so I deleted them.  That left me with 155 valid entries.  If I was concerned, I’d have to dig deeper but I just wanted to make sure that I could make it work.

Then, I needed to clean up locations.  There were some “Toronto”s and some “Toronto, Ontario”s and some “Toronto, ON”s and some “Toronto, Ontario, Canada”s.  Hmmmm.  This appeared to be a problem until I clued in that everyone was from Ontario anyway.  So, I did a Find and Replace for “Ontario”, replacing it with nothing.  Ditto for “Canada” and “ON”.  That cleaned up the list very nicely…except for the “ON” part.  It kind of butchered the “Toronto” folks but that was easily fixed.  A quick scan up and down the list revealed some folks who had misspelled their town.  Fixed.  So, that gave me a column of Ontario towns and cities.  Next, I want to be able to plot them on an Ontario map so in the column next, I filled a bunch of “, Ontario”s.  And, next to that I filled a column with the community concatenated with the province.  =A1&B1 in C1 composed things nicely.

Time to save the file.

Now, the question becomes one of how to get these communities on a map?  There’s a terrific service called Click2Map.  It provides a simple map editor and features a wizard that pulls markers (in my case the communities) from an uploaded file.  You can watch the wizard plot the points and soon there’s a bundle of markers where Ontario resides on the map.  Now, it’s just a matter of zooming to isolate the province and I have the map as shown above.

You’ll notice that what folks from Northern Ontario say is true.  Those of us in Southern Ontario are dense.  Or at least densely populated.  Let’s zoom in and get a better picture.

And, not to ignore our friends in the north, we can zoom to reveal…

You’ve got to love Highway 11.

Back to Southern Ontario, Click2Map does recognize that there will be times when the markers are close together and you can bundle them.  Southern Ontario bundled looks like this. 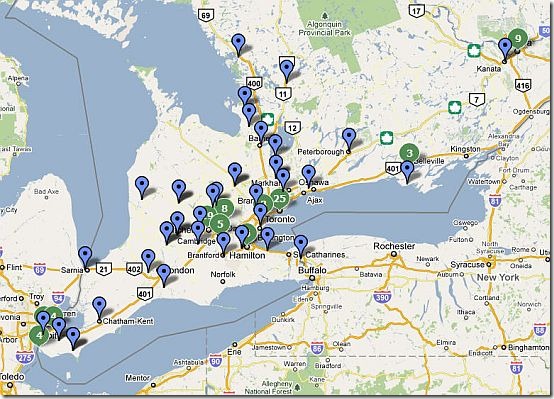 I did have a great deal of fun playing around with the Export.ly / Libre Office / Click2Map combination.  Even though the entire database wasn’t useful, I suspect that the trends would be similar if everyone had their community located.

I can see all kinds of classroom applications flowing from this activity.

In the meantime, scroll back to the top and see the distribution of Ontario Educators on Twitter.  I don’t imagine that the distribution comes as a surprise.  If you are an Ontario Educator and wish to be added to the list, please add yourself to the form at:  http://livebinders.com/play/play_or_edit?id=52544.  I’d really like to add your blog to the list of great content that we’re generating in the province.  You can access the blogs added at the link above or at http://www.scoop.it/t/ontario-edublogs.