Labour Day weekend is big in Essex County.  The biggest event for us is our annual trip to the Harrow Fair.  According to their website, it’s the 156th annual event this year.  That’s an incredible tradition.  My friend @doremigirl and I had been conversing about the awesome food that’s available at these places.  Probably the most delicious sin that you can partake would be her elephant ears or the Canadian equivalent, the beaver tail.  This year, it would be funnel cakes.  Here’s a shot for you, Yoon.

That’s a lot of tasting eating, to be sure and it did feed a family of four.  We resisted the urge to top it off with caramel, candied cherries, and whipped cream.

Now, the thing about rural fair in small towns is that it really reflects the values and personalities of the community.  There are folks who bemoan the fact that the youth of today is so wrapped up in technology that traditions will go away.  Yes, there were kids walking the grounds texting on their phone  (hey, even I was) but the kids are all right.  All that it takes is a tour of the exhibits to realize that photography, sewing, knitting, cooking, and caring for livestock are still skills to be put on display and exhibited.

There’s something special listening to a teenager talk about the types of calves on parade during bossy bingo and then to witness an argument between 4H members over whether or not it’s “legal” to keep walking the calf after the deed was done!  That’s to comforting to know that in this day of self-lacing shoes that traditional skills still have a place. 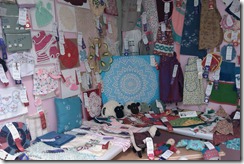 The visit ended with an outdoor concert by @dericruttan.  In anticipation of the concert, I had checked out his web presence and Twitter account in advance and started following him and was surprised to get a quick follow back.

Now, the concert hall in Harrow also doubles as a baseball field so the seating is put together with some local inspiration.

The abundance of straw made for some no-smoking rules but that’s OK.  The only downfall was the very strong winds that kept stirring up the dirt but that didn’t bother the audience or the band.

Where else can you sit just a few rows back and enjoy such Ruttan favourites as “Shine”, “California Plates”, or “Lovin’ You is Killin’ Me” along with his songs that were published by others like Dierks Bentley “Good Time”.

I think there probably was a little too much loud guitar for some of the older folks who had brought their own lawn chairs and ended up leaving early but it was their loss.

It was a great day and, for this country boy, a real highlight of the summer that we look forward to every year.  I endure the stories of the banty hens but it’s a really enjoyable day to kick back and just enjoy the rural traditions.