Over the weekend, I was “tagged” by Skip Zalneraitis who goes by the handle @skipz on Twitter.  We’re friends there and also on Facebook.  So, I check out what it was that I was tagged to do.

The tag was to create a new note on Facebook and it starts out by asking you to identify six names that you go by.  Hmmm.  Mild interest in this one.  So, I follow the instructions which essentially means to copy and paste the template that Skip sent me to create my own after erasing his answers.

There were about 10 different questions that you had to answer.  Approximately half of them were no brainers and about half of them had me thinking about what would be actual content.  I like to take a little dig at my kids when I create something like this so made reference to Bubby’s pancakes and The Wease’s choice of buying Dr. Zip.  The whole process actually took me a while to do, as I paid attention to content and format.

Then, the final step in these things is to “tag” others.  This step can often be construed as being annoying, along the line of spam and intrusive but it’s March Break and perhaps some of my friends would like something interesting to do.  So, I tag the usual suspects.  Then, there’s my friend Dana in Houston and in typing her name, Facebook suggests others so I thought  “What the heck…”.

I probably ended up tagging a dozen folks and sent it off.  I half expected “don’t bug me” emails in response.  What I got quite surprised me.  Other folks actually seemed to be interested and completed the form.  Since one of the rules is to tag the original, I got immediate notice that other notes had been created.  I read them with interest and noticed that these people had tagged others, some of whom I had already tagged. 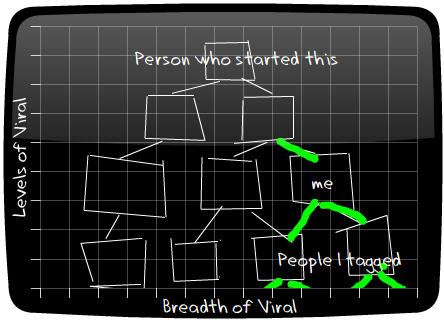 Doug’s Crappy Graph of how viral works
So, I’m thinking that the whole process looks like the above.  This morning, I decided to log back into Facebook and see how things were going.  There were even more of the people that I had tagged who had completed their notes.  Interestingly, there were other “friends” that had completed the exercise.  When I checked them out, there was no common thread other than me.  So, they had arrived by some other path.

In the classroom, what would happen if a teacher started an activity like this and tagged a few students to complete the form.  Instead of a question like “What did you eat today”, imagine that the question was “Name three things that a Blue Jay eats”.  Instead of instant recall, imagine if students had to get onto the internet or their own personal research network to find the answers.

Could we make education viral?